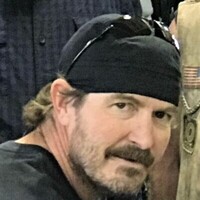 Kevin passed away unexpectedly at his Taylorsville, Utah home on September 8, 2020, from complications of Diabetes.

John Kevin Rees was born in Boise, Idaho to Craig Rees and Brenda Clark on May 6, 1971. His parents divorced when he was very young. He grew up in Bountiful, Utah, moving to North Salt Lake in his late teens. In his early twenties he purchased a mobile home in West Jordan, that he completely remodeled. In 2014 he moved to a larger manufactured home in Taylorsville.

In the late eighties, Kevin began his career in construction. He became a foreman, grid installer, and craftsman; who had a natural talent for building. He was employed by ACS, Mitchell Acoustic Inc., and Golder Acoustics.

Kevin enjoyed fly fishing, hunting, water, and snow skiing. Taking family and friends out on his boat was one of his favorite ways to spend free time. He loved taking his boys shooting, proudly teaching them how to safely handle a firearm. But, his true passion was riding his motorcycle, a 2018 Harley Davidson Street Glide, that he won in the $100.00 per ticket (he bought 2) raffle held at the end of the 20th Annual UMF You Are Not Forgotten motorcycle ride that helps to bring Christmas to the kids at Primary Children's Hospital. That was one of the best days in Kev's life. He fulfilled a dream in 2019, when he road that same motorcycle to Sturgis, South Dakota for the annual bike rally.

Kevin was the epitome of contradiction, best described by his son, Kody, as a "Pitbull." He could be aggressive, short tempered, loving, tender and had a strong imposing appearance with a great physique.

An informal memorial will be held on Wednesday, September 16th from 6:00 to 8:00 pm., at McDougal Funeral Home, 4330 South Redwood Road, Taylorsville, Utah 84123. His ashes will be spread by loves ones when they are ready and in a place that reminds them of Kevin.

In lieu of flowers the family would appreciate help with the memorial costs and other expenses. A mailing address will be provided upon request.

Kevin will be greatly missed and loved forever. Rest in peace, Babe (Reesy).

To send a flower arrangement or to plant trees in memory of Kevin Rees, please click here to visit our Sympathy Store.

To order memorial trees or send flowers to the family in memory of Kevin Rees, please visit our flower store.