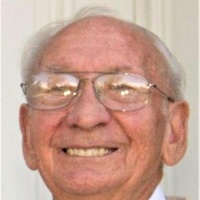 “To know him was to love him.”

Kenneth Dale Malone passed away on August 2, 2019 due to complications related to heart failure. He was 91 years old.

Ken was born prematurely on March 20, 1928 to Ottilia and John Joseph Malone in Salt Lake City. He had two older brothers, John Harry and Glen.

He served in the United States Army, then began a career as a typewriter mechanic for Royal Typewriter. After this, he enjoyed a 33+ year career at Hill Air Force Base working on aircraft instruments including those for the Minuteman Missile.

Ken was married to Darlene Sheridan on September 16, 1955 in the Salt Lake Temple. Together they had three daughters: Susan Malone (Dan Berg), Nancy (Lloyd) Cottrell and Colleen (Lee) Lunday. He also had four grandchildren: Criste Cottrell, Cameron (Brittney) Lunday, Becki (Paul) Weiler and Adriane Lunday; and two great-grandchildren: Jackson and Mallory Lunday. His beloved wife, Darlene, passed away on their wedding anniversary after 37 years of marriage.

Ken remarried on September 12, 1997 to Pearl Nelson. He delighted in being a part of her family as well, which included Sharon (Robert) Lloyd and John (Wendy) Nelson; numerous grand and great-grandchildren.

Ken loved all animals. He especially loved his dogs and cats, as well as the neighborhood animals, including the wild birds.

Ken was a kind, loving, sweet man. He was the peacemaker of our family. He will be missed by all who knew him.

A big thank you to our sister Susan and her husband Dan for the loving care they gave to Dad in their home for the past six months. We would also like to thank Valeo Home Health: Kelsey, Lisa and Allison for their compassionate service.

To send a flower arrangement or to plant trees in memory of Kenneth Dale Malone, please click here to visit our Sympathy Store.

To order memorial trees or send flowers to the family in memory of Kenneth Dale Malone, please visit our flower store.