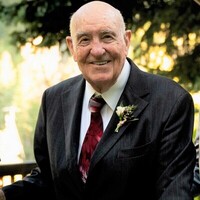 On November 12, 2021, Kay Rymer (93) returned to his Heavenly Father due to causes incident to age. He was born February 19, 1928, in Torrey, Utah, to Sidney C. Rymer and Ellen Josephine (Nellie) Hanks. He was the ninth of eleven children.

Kay grew up in Grover, Utah and graduated from Wayne High School and Snow College. He received his bachelor’s and master’s degrees from Brigham Young University and lacked only his dissertation from obtaining his doctorate from the University of Utah.

Kay served a mission for The Church of Jesus Christ of Latter-day Saints in Western Canada. Six months after his return home, he joined the United States Air Force and served for 4 years with responsibilities as an instructor, flight engineer and inspector on F-84 thunder jets. During his tour of duty, he flew to 26 European, Asian, and African countries. The premier flight was to the Holy Land with religious leaders to walk where Jesus walked.

Kay loved teaching and prepared himself for a career in education, counseling, and administration. He taught at Irving Jr. High, Northwest Jr. High, Clayton Jr. High, and ended his career of 33 years as a counselor at East High School.

The Church and his family were his greatest joy. He instilled a love of education and service to all his posterity. He served in numerous positions in the Church with Gospel Doctrine teacher, Bishop, and Stake Mission President among his favorites. In his 80s, he and his wife Arlene completed a mission in South Salt Lake. In his 90s, he was still attending the temple weekly.

Kay was preceded in death by his wife, Mary Arlene Mikkelson Rymer; their infant son David; his parents; and all his brothers; and sisters. He is survived by his four children, Diann Decker (Richard) of Orem, Vickie Dimond (Doug) of Centerville, Gary Rymer (Chaton) of Bountiful, and Randy Rymer (Susan) of Mapleton; 16 grandchildren and 36 great-grandchildren. He is also survived by his wife of 10 years, Ardith Gledhill Rymer; and her three children, David Lindgren (Rosa), Brent Lindgren (Karina), Jara Lindgren; and 12 grandchildren.

Funeral services will be held Tuesday, November 23, 2021, at 11:00 a.m. at the Brookshire Church Building located at 1325 West 5550 South in Taylorsville, Utah. A viewing for friends and family will be held Monday evening, November 22, 2021, from 6:00 p.m. to 7:30 p.m. at McDougal Funeral Home located at 4330 South Redwood Road, with an additional viewing at the Brookshire Chapel one hour prior to services. Interment, Valley View Memorial Park.

A virtual viewing of the funeral may be accessed from the link below:

To send a flower arrangement or to plant trees in memory of Newell Kay Rymer, please click here to visit our Sympathy Store.

To order memorial trees or send flowers to the family in memory of Newell Kay Rymer, please visit our flower store.