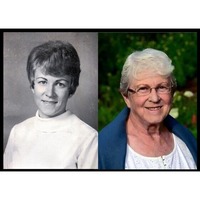 Karen Fitzgerald Milligan, 79, of Taylorsville, Utah, our loving mother, grandmother, great-grandmother, and friend has returned to the arms of our Savior and the countless other loved ones on January 19, 2021. Mom was born April 26, 1941, to Douglas Blake Fitzgerald and Otella Gae Tolman in Salt Lake City, Utah.

Mom grew up in Copperton, Utah eventually moving to Murray, Utah where she graduated from Murray High School in 1959. After graduating high school, she married Grant Ashby, and they had 3 children together before they divorced. Shortly thereafter, she was introduced to Howard Rodney (Rod) Milligan, they fell in love and were married on July 5, 1968. They were later sealed in the Salt Lake Temple for time and all eternity on November 8, 1974. Mom and Dad had 5 children together which when combined with Dad’s 4 and Mom’s 3, that they each brought into the marriage, made a total of 12 children. They worked together in blending their family. They never used “step” or “half” in their communications and neither do we. We have always been simply brothers and sisters.

After raising the majority of her family from the comfort of her home, mom got a job at the Salt Lake Community College. There she worked for nearly 20 years. She started in the bookstore and worked her way up to Graduation Specialist, where she was in charge of the graduation program. If you got a diploma it had to pass by and be signed by her. She retired in 2006 to devote her time to service and family.

The best way to describe Mom was a ministering angel. She was a low profile, high impact disciple of Jesus Christ. She served in various callings throughout her life. As Girls Camp Director for more than 10 years, she earned the title “Best.” The young women loved her; many still reached out, sharing with her the impact she had on them. She also served in the Relief Society, including a time as Relief Society President. She was a minister to the end. Her favorite calling was in the primary where her testimony of the Savior shined among the children. She was loved by everyone she taught. Her greatest lessons were not in the classroom, but through her example as a disciple of Christ. After Dad passed away, and Mom retired, she decided to serve a mission. Mom, with her best friend from high school, Mickee Roll, applied and were both called to serve in the Mesa Arizona Mission as companions. There she impacted the lives of many missionaries, while working in the mission office. She also developed a very tender relationship with her mission president Mark Bassett and his family, whom she loved dearly, and had kept in touch with ever since. When she came home, she served another mission for 10 years in the Events Department of The Church of Jesus Christ of Latter-day Saints. She never sought praise or recognition, she simply did what she could wherever she was called, and she did it with her whole heart. What truly set her apart was what she did outside of her callings. The countless people she would serve just by loving them, then recognizing and responding to their needs.

Mom loved her family and friends. She was always so proud of her children. She excelled in the Grandmother department, attending almost every sporting event, every play, every concert, and every dance recital, as well as countless other important events such as baby blessings, baptisms, primary programs, and talks. She missed very few events amongst all of her 35 grandchildren, as well as events for extended family.  She made us tired watching her constant motion as she moved about her house and yard, cleaning and working. She could not sit still for anything, not even a Hallmark movie. And yet she still found time for friends. She was proud of her Pioneer heritage and was involved with the DUP (Daughters of the Utah Pioneers) as well as her Red Hat Society, The YaYa Sisters, and her beloved Single Sisters group.

She was preceded in death by her parents Douglas and Otella; her husband Rod; her sisters Ann and Vickie; and her bonus siblings Verla, Carolyn, Edwin, Clifford, Leonard and Neil.

A viewing will be held Sunday, January 24, 2021 from 6-8pm at McDougal Funeral Home located at 4330 South Redwood Road Salt Lake City, Utah 84123. The Family Funeral services will be at 11am at the Taylorsville Gardens Ward located at 4252 South Bennion Road Taylorsville, Utah 84129. There will be a Zoom link for those who would like to participate but are not able to attend. Her graveside services will be Monday, January 25, 2021 at 1pm at the Utah Veterans Cemetery and Memorial Park located at 17111 South Redwood Road Bluffdale, Utah 84065.

To send a flower arrangement or to plant trees in memory of Karen Fitzgerald Milligan, please click here to visit our Sympathy Store.

To order memorial trees or send flowers to the family in memory of Karen Fitzgerald Milligan, please visit our flower store.