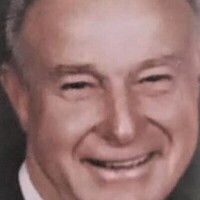 Juel Barrett Gwynn was born on 15th April 1927 in Woods Cross, Davis Co., Utah to George William Gwynn and Martha Brauer Gwynn.  He was the 11th child of 15 children.

As a Seaman First Class he served our country in the navy during WWII on the USS Shangri-La CVA-38 from 1945 – 1948; being witness to the atomic bomb tests in the Bikini Islands.  After an honorable discharge he met and married Darlien Marie Gerber in Salt Lake City, Utah on 8th September 1950.

They resided in Granger (West Valley City), Utah from 1960 – 2018 where they raised their five children.  The family was later sealed in the Salt Lake Temple on 19th June 1963.

You could always tell when our father was in the room because he had an infectious and happy laugh.  He loved making others smile and always joined in on their laughter.

He worked incredibly hard to provide for his wife and family as a tire mechanic on semi-trailers.  His other interests were landscaping his beautiful yard with ponds and plants, brick laying, building beautiful block fences, and cement work which he also did for his family and in the neighborhood where he lived.  If he could be of service to others that is what made him happy.

Juel and Darlien served a humanitarian mission at the Distribution Center for The Church of Jesus Christ of Latter-day Saints which they loved.  They also took care of their ward house and grounds for many years.

He always made sure that his wife, Darlien, had a beautiful flower garden to tend and enjoy.  He loved and cared for her through 13 years of Alzheimers, until she passed away 2 August 2019 in Bluffdale, Utah. He missed her dearly and yearned to be with her.

Juel passed away of natural causes on the 24th December, 2021 at the age of 94 in Bluffdale, Utah.

He was preceded in death by his wife, Darlien; his fourth child, Douglas G. Gwynn; his parents; and 12 of his siblings.

To order memorial trees or send flowers to the family in memory of Juel Barrett Gwynn, please visit our flower store.