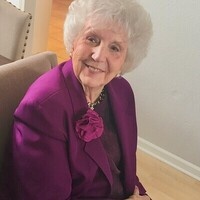 Joyce Tanner Stalnaker, 90, of West Valley City, Utah, passed away peacefully at home surrounded by her loving family on Thursday, May 6, 2021.

Gracious and warm, Joyce radiated kindness and had a natural interest in people, always generous with love, compassion and understanding for others. “Charity, service and Christlike” are the descriptors that readily come to mind for her family. With a delightful sparkle in her eye, Joyce had a full-hearted laugh that got others joining in and called everyone “dear” or “you cute thing.”

Joyce and her twin sister, Joan, were born to Alta Rowse and Douglas Floyd Tanner on April 8, 1931 in Salt Lake City, Utah. Joyce loved being a twin and she and Joanie had endless fun together growing up as “The Tanner Twins,” inseparable, dressing alike, and switching places in grade school so each could double up on favorite classes: art for Joyce and music for Joan.

At age 12, their family moved into the “Tanner Home” at 250 South 10th East in Salt Lake City, filling this handsome, historic dwelling with joyous laughter and devoted love for one other – and always an abundance of beautiful music. Joyce loved to sing and nurtured and shared this talent throughout her life.

Joyce graduated from East High School in 1948 and attended the University of Utah where the Tanner Twins participated in many campus activities and were in Kappa Kappa Gamma sorority. They sang in the Homecoming Quartet contests, winning first place two consecutive years. The twins also wrote the music for the Greek Spring Chorus competitions. Joyce directed the Kappas and Joan accompanied, also earning this top prize for two consecutive years. Joyce proudly wore her white WRA letter sweater for earning the highest degree in sports at that time from the Women’s Recreational Association. She also was a member of Spurs and Cwean, and was President of Mortar Board.

During college summers, the Tanner Twins worked at the Grand Canyon waitressing and providing musical entertainment, with shows written specifically for them. At 5'9", the twins stood out not only for their stately beauty, but also for their exceptional musical talents.

After earning her bachelor’s degree in sociology in 1952, Joyce worked a summer at Yellowstone National Park and then began employment with Mountain States Telephone and Telegraph and started the “Belltones” singing trio with friends and co-workers Diane “Duffy” Dunford and Beth Coffman. By the mid-1950s, Joyce began traveling throughout Europe working for the U.S. Air Force Special Services, where she met handsome pilot Robert at “Oktoberfest” in Germany. Joyce married Robert Lee (Bob) Stalnaker in 1957 at Ramstein Air Base in German Rhineland, and their military journey continued with four stops in the United States: Luke Air Force Base (AFB) in Phoenix, AZ, Nellis AFB in Southern Nevada, McConnell AFB in Wichita, KS and March AFB (now Air Reserve Base) in Riverside, CA.

In 1961, they relocated to Salt Lake City as Bob began a career as an air traffic controller with the Federal Aviation Administration, and the next year they settled in Granger where they raised their four children. Joyce deeply loved her family and taught her children by example to be caring, open-minded and to look for the good in others. Over the years, the family spent many happy times boating and camping at their property near Flaming Gorge, and on annual trips to Bob’s family farm in Kansas.

Joyce began volunteering at Salt Lake County Detention Center in 1962, helping young people in the juvenile justice system. Through her dedicated service, Joyce turned that into professional employment as the Director of the Volunteer Program at the facility where she created a stellar plan bringing in volunteer leaders and teachers from many fields to offer classes, mentoring and support. Joyce also was instrumental in having a chapel built at the Detention Center, recognizing the importance of a spiritual refuge for the residents. A firm believer in the power of personal change, Joyce was a steady source of encouragement, support, and guidance for young people in difficult circumstances.

In 1980, she returned to the University of Utah earning her master’s degree in social work three years later, further enhancing her knowledge and experience. In 1995, she retired from Salt Lake County after 32 years of impacting lives.

In her retirement, Joyce continued to be active and engaged with her family, her many friends and social activities, and church service. She adored her children and grandchildren and was with them as much as possible and traveled often to visit and participate in special events such as school programs, church milestones, graduations, and weddings. Her door was always open for grandchildren to come and stay, and she was always ready with a warm embrace.

Throughout Joyce’s life, music accompanied everything. She and dear friends Peggy Christensen and Phyllis (Williams) Bendixen formed a trio, with Sandra Whitlock on the piano, creating a group aptly named “The Friends.” They performed original programs all over the Salt Lake Valley from 1970 to 1980, entertaining at numerous church and business functions. She enjoyed many opportunities to sing and direct music in church for regular Sunday services and special programs.

A devoted member of The Church of Jesus Christ of Latter-day Saints, Joyce was a woman of deep faith and integrity, and served in many capacities in the Primary and Relief Society leadership at both ward and stake levels, and in numerous musical positions.

She is now singing with the angels and that chorus has become sweeter.

The family expresses special thanks to Marie, Angelica, Mandy, Cami and Ashlee from Aspen Ridge Hospice as well as Lorna Middleton Almond for their loving, compassionate care.

To send a flower arrangement or to plant trees in memory of Joyce Tanner Stalnaker, please click here to visit our Sympathy Store.

To order memorial trees or send flowers to the family in memory of Joyce Tanner Stalnaker, please visit our flower store.