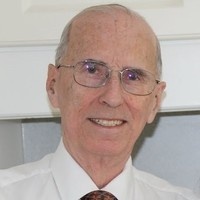 Was employed as a reporter, science editor, and editorial writer at the Deseret News for 40 years until retiring in 1993. Also worked earlier at the Salt Lake Telegram and Salt Lake Tribune. Once described by colleagues as a “newspaperman’s newspaperman.” In 1993 won the Deseret News’ Mark E Peterson Excellence in Writing award.

In addition to writing and world travel as a reporter, including several assignments in Europe, he authored 111 Days to Zion, a popular day-by-day history of the 1847 Mormon Pioneer trek to Utah.

Born 22 August, 1930, in Salt Lake City, to Joseph Mansel Knight and Geneva Wood. Grew up in the Salt Lake area and graduated from Jordan High School in 1948. An indifferent student but admitted bookworm, he said he “accidentally fell into journalism without benefit of higher education.” However, he would one day be awarded an international science writing fellowship at Columbia University’s Graduate School of Journalism in New York City.

Served with the Utah National Guard and subsequently with the U.S. Army in 1951–52 during the Korean War. Discharged as a Sergeant First Class after 20 months.

A member of The Church of Jesus Christ of Latter-day Saints. Served a mission in Germany 1953–55, three stake and ward missions, and with his wife for 30 months as church service missionaries working in the LDS Humanitarian Center in Salt Lake City. A former Bishop, High Councilor, and teacher in many church organizations.

Married Ursula Glas 12 July, 1956, in New York City. Later solemnized in the Salt Lake Temple. He met her in the LDS mission office in West Berlin and always described her as “the prettiest girl I ever met and the most wonderful.” She preceded him in death 23 November, 2010.

Daughter Nikki and her husband Greg Park also preceded him in death.

Special appreciation to his daughter Crystal and her family as his care provider for the past several years until his passing.

To send a flower arrangement or to plant trees in memory of Hal Knight, please click here to visit our Sympathy Store.

To order memorial trees or send flowers to the family in memory of Hal Knight, please visit our flower store.