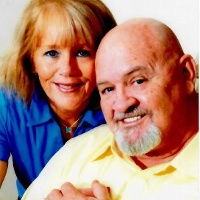 On April 6, 1973, Johnny married his beautiful wife, Marie.  His family was his highest priority and everything he did was because of them.  He took his responsibility very seriously of being a father to his two sons, Bryan and Brandon, and did all that he could to care for them and provide for them.  They enjoyed camping, fishing and attending Denver Broncos’ games together as a family while they lived in Colorado.  In 1988 they moved to Taylorsville, Utah where they’ve been blessed with many dear friends and choice memories.

Johnny loved being a grandpa to his 10 grandchildren as much as he loved being a dad.  As his health allowed, he participated in many of his grandkids’ activities, performances and ball games.  He especially enjoyed attending the Veteran’s Day programs at his granddaughter’s schools.

Johnny was baptized a member of The Church of Jesus Christ of Latter-day Saints in December 2003.  He was sealed to Marie in the Salt Lake Temple on January 22, 2005, creating their eternal family union.

We will miss Johnny’s smile and his humor, but we are reminded through the words of his grandson, Elder Braxton Byrge, that “when someone passes from this life it is not a day of sorrow but a day of triumph over death.”

He is preceded in death by his son, Bryan Byrge (leading the welcome cheer in Heaven); his parents, his brother Jack and his sister Judy.

To send a flower arrangement or to plant trees in memory of Johnny Hugh Byrge, please click here to visit our Sympathy Store.

To order memorial trees or send flowers to the family in memory of Johnny Hugh Byrge, please visit our flower store.