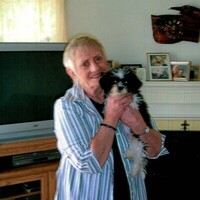 She married DeVere Southam; from that union Valerie and Nadine were brought into the world. She later married William (Bill) Romney, he was an inspiration to her and the work they did together to help others through the AA Program.

Joan was a lot of things during her life, wife, mother, homemaker, public relations manager; however, her real passion in life was helping others overcome addiction. Joan found her sobriety 40 years ago through the help and support of Alcoholics Anonymous, (AA). From that time forward she devoted her life volunteering and helping others overcome addiction.

During her work with AA, she and others realized that there were very few resources to help recovering women. So, in April of 2007, Joan and several women, sitting around her kitchen table asked, “Why can’t we create a women’s retreat house for alcohol and drug abuse?”

These women had nothing, no money, no counsel, just strength and determination to make it happen. They made phone calls, knocked on doors and wouldn’t take no for an answer until they found the resources they needed. And then on December 5, 2007, the Women’s Retreat House for addicted women was opened.

Joan was preceded in death by her husband William (Bill) Romney; her brothers Doug and Glen Johnson; her daughter Valerie (Waddell); and her great-grandson Logan Michael Ward.

Joan touched many lives during her lifetime and is remembered by many.

To send a flower arrangement or to plant trees in memory of Joan Lillian Romney, please click here to visit our Sympathy Store.

To order memorial trees or send flowers to the family in memory of Joan Lillian Romney, please visit our flower store.