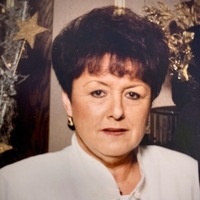 Gerritje Wilhelmina “Jerry” Gundersen was born to Hendrikus and Susanna Van Grol in Arnhem, Holland on August 7, 1943. Her family survived WWII as proud Dutch Resistance members, though political turmoil caused them to immigrate to the United States in 1950. Jerry and her family lived for a short time in Idaho before settling in Utah as their permanent home.

Through a friend, Jerry had a colorful meeting with Dennis “Denny” Gundersen in 1961 in Salt Lake City. They were married six months later on November 30, 1962, making this year their sixtieth wedding anniversary. Jerry and Denny had three wonderful children – Ted, Tracey, and Terry – who Jerry loved with all her heart. Several years later, Jerry and Denny adopted Todd, a bonus child they also loved very much. Jerry also loved her grandchildren, great-grandchildren, and many nieces and nephews.

Jerry was a talented crochet artist, making beautiful items for family and friends often. She went on to become a US Citizen in 1986 and took great pride in being an American. Jerry touched so many lives, giving everyone a chance, and helping others out as much as possible. Many have stayed at their home where everyone was welcome no matter their circumstances.

She is preceded in death by her parents; son Todd; and grandson TJ.

A celebration of Jerry’s life will be announced at a later date.

To order memorial trees or send flowers to the family in memory of Jerry Gundersen, please visit our flower store.