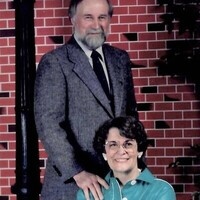 "I went to the train station in Ogden with Gordon and his parents. I didn't think I could ever let him go. He was too young to join that fight, but he was determined to do something. When he came home after the war, we found each other but the world had changed. We both married other people, had our children, lived our lives. In the early 1980s, fate brought us together again. We straightened out our messes and made promises to each other. We were married for 35 years.

It is so good to not miss him. We are together."

They are survived by Gordon's children - Ken, Paul, Heidi and Duane and Jeanne's children - Brian and Alison and their families, as well as Jeanne's sister - Lynda Udy and her family.

We will forever cherish our time with them.

To order memorial trees or send flowers to the family in memory of Jeanne Willey Buchi, please visit our flower store.