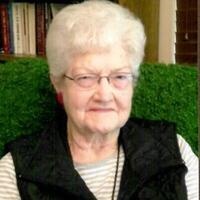 Jeane was born November 8, 1935 in Altonah, Utah to Jack K. and Verna Thacker Allred. She passed away peacefully at her son’s home in Grantsville, Utah on December 27, 2021.

After she married Ray Lambert in 1950, she went with her husband, who was in the military to Texas and then Colorado Springs. Eventually, they moved to Salt Lake City. They also lived in West Valley City for a while, but then ended up in South Jordan where they lived for over 48 years.

Jeane’s current hobbies are reading, sewing, and making quilts, especially for her family, and talking on the phone. Her grandson calls her his “traveling Grandma”, because after her husband passed away, she sold her home, gave all of her furniture and most of her belongings away and lived with her children on a rotating basis, three months at each home. Everything she owns, fits into her car: clothes, computer, sewing machine and pills. She misses her collections of books, but makes up for it by checking books out of the library.

She says the bravest thing she has ever done was to get her real estate license and work as a realtor. She also worked as a book keeper for her husband’s construction business. Jeane and her husband Ray served a mission together to Pennsylvania. Jeane is a talented homemaker and enjoyed developing all of the skills and arts of running a home. Her greatest joy is being with family, especially her grandchildren. She even stays in touch with them by texting!

She is preceded in death by her husband Ray; daughter-in-law Kerri (Raymond); grandson Jared Lambert; sisters Janet, Doris and Helen; and brother Chip.

Friends and family may also join via zoom:

To order memorial trees or send flowers to the family in memory of Jeane Allred Lambert, please visit our flower store.