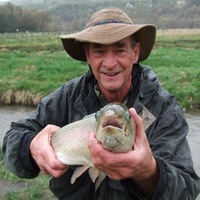 In the early hours of February 17, 2022, Jay Merlin Gaisford, 67, passed away with his loving wife Becky holding his hand, after battling COVID. Jay was born to Merlin and JoAnn Gaisford on February 21, 1954, in American Fork, Utah. He would be the first of three sons and two daughters. If ever there was a man born to be a big brother, it was Jay. He was always an example and protector for all his siblings.

He and his brothers, Don and Steven, grew up in Lehi, Utah. At the side of their father, they developed a passion for all things outdoors, including hunting and fishing, a passion Jay would go on to share with many others, most especially his wife, daughters, and grandchildren. As teenagers, the three boys welcomed two little sisters, Laurie and Lisa, whom they all doted over. Jay’s sisters adored him.

Jay graduated from Lehi High School in 1972. He then attended Brigham Young University for nearly four years, where he tried out many fields of study. While attending BYU, Jay met Rebecca Adams on an unsanctioned church camping trip on July 2, 1976. First he stole her pillow, then he stole her heart.  From that day on, they were practically inseparable, having each finally found the other half of their soul. Thus began the most epic love story of all time. After a whirlwind courtship and a whirlwind engagement, they were married for time and all eternity in the Salt Lake Temple on January 7, 1977.

After 45 years, Becky and Jay still flirted and cherished each other. They treasured every minute together and learned to love each other’s interests. Becky learned to love the outdoors, even taking up fishing and hunting (as long as she didn’t have to touch those slimy fish). Jay took photography classes with Becky and loved nothing more than taking photos of his beautiful wife against nature’s backdrop. Many who knew them were inspired by their love for each other and learned to believe in “Happily Ever After.”

Jay and Becky were blessed with two beautiful daughters, Aimee and Amber. They raised their girls to be strong, capable and believe in themselves. Jay spent his time and money indulging his girls’ every whim. He told them frequently not to expect an inheritance because he was going to spend every penny on them while he was here to enjoy it with them. Aimee and Amber were blessed to always know they were loved more than anything, they were safe from the storms of the world, and they were spoiled.

Jay and Becky are active in The Church of Jesus Christ of Latter-day Saints and taught their girls to believe in a loving Heavenly Father. Jay served several years as a scout master and gained surrogate sons over that time. He taught many to love and respect the outdoors and spent time going above and beyond what was asked to help all he came in contact with to become incredible.

His impact reached beyond his family and his ward. In 1994, the Gaisford’s opened their home and their hearts to a special girl from Belgium. Saskia Van Nuffelen would become their “European daughter.” He became the father figure she’d been missing most her life and eventually became an honorary Grandpa to her little girl, Milla.

No one ever worked harder than Jay. A week before marrying Becky, Jay got a job at Mark Steel Corporation where he would work until the company went out of business 40 years later. He began as a welder, project manager, estimator, and eventually Executive Vice President. He knew everything about the industry and was well respected by his peers as the man with all the answers.

After Mark Steel closed, Jay was blessed to work at Keech Steel. Though initially hired on as an estimator, Jay was overjoyed and proud to gain the title of Vice President. He loved his time working there and found a lot of support from his boss and coworkers as he faced multiple health challenges in his final years.

Perhaps his greatest joy of all arrived in the form of seven incredible grandsons and one precious granddaughter. He loved each child fiercely and insisted on as much time with his grandbabies as he could get. Every child got a special trip with Grandma and Grandpa to Yellowstone. Every birthday included a “Grandma-Grandpa Day” focused on indulging that grandchild’s every desire.

Jay was a walking miracle. In 1993 he received a life saving kidney transplant from his brother Don Gaisford, and another in 2007 from his brother-in-law Curtis Hampton. We had 29 years of adventures because of these two men. Words cannot express the love and gratitude we have for them.

We would also like to express our deepest gratitude to Dr. Barklow, who cared for Jay and extended the life of his transplants as much as possible. Finally, to the incredible staff of LDS Hospital, thank you for your care and support over the last three weeks. We were blessed by the most devoted physicians and nurses, who did all they could to try to save his life.

He was preceded in death by his parents, Merlin and JoAnn.

To send a flower arrangement or to plant trees in memory of Jay Merlin Gaisford, please click here to visit our Sympathy Store.

To order memorial trees or send flowers to the family in memory of Jay Merlin Gaisford, please visit our flower store.