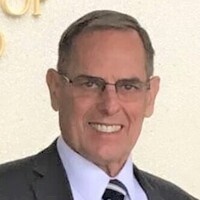 James Turnbull III, 75, of West Valley City, Utah, passed away April 23, 2022, at Intermountain Medical Center in Murray, Utah due to complications from a brain aneurysm and stroke.

Jim was born July 21, 1946, in Ogden, Utah to James Turnbull Jr. and Leona Bowlden.  The family moved to Boise, Idaho when he was 7 years old.  His first job was washing dishes in a casino in Nevada at age 12 where he was paid in silver dollars.

Jim had a passion for fixing things.  He bought his first car when he was 17, a blue 56 Chevy hot rod that wouldn’t go over 35 miles an hour, until he tuned it up.  Jim met his wife Candy Hooper at church.  They were married September 24, 1964, in Boise, Idaho. Their marriage was solemnized in the Cardston, Alberta, Canada Temple on September 22, 1973. They have been married for 57 & 1/2 years.

When Jim was 16, he started working as a bag boy at Buttrey Foods, which began a 25-year career with the company.  Jim and his young family were transferred to Coeur d’ Alene, Idaho, where he was made 3rd man.   After 7 years, he received a promotion to Assistant Manager and was transferred to the new store in Moses Lake, Washington, in 1976. Four years later he was promoted to Manager and the family moved to Idaho Falls, Idaho in 1980.

Jim opted for a career change after Buttrey’s was bought out.  His next venture was owning Sunshine Sprinkling Systems.  He and his crew of young men installed residential sprinkling systems. He had one of the best farmer’s tans in town!

He and Candy moved to the Salt Lake City area in 1998 because Jim wanted warmer weather to grow a garden.  They lived in a townhome for 19 months, where he worked tirelessly day and night, with family, to build their current home. In Salt Lake, Jim was hired as a maintenance technician for Boise Cascade/PCA, making sure their machines ran smoothly.

Jim was never one to sit still. Retirement found him volunteering several days a week at Tiny Tim’s Foundation for Kids, making cars to give to children. Nothing made him happier than to put a smile on the face of a child.

Jim took a packet of cars with him EVERYWHERE and had at least two in every coat pocket!  On a daily basis, Jim would receive a call from his friend “Big Mark”, who always had a joke to share with him. Then Jim would rattle one off for Big Mark. It was funny to listen to the two of them banter back and forth. He also took the opportunity to volunteer at clinics with the Moran Eye Center, University of Utah Outreach Program.

Jim’s nickname was HandyJim because he was a self-taught “jack of all trades”. He built his last 3 houses and rebuilt multiple cars.  His kids relied on him for plumbing and electrical help, car repair, and had constant questions regarding which tools were best for the job or advice on how to proceed with any number of conundrums.  They knew that their dad could fix “anything”.

Jim was beloved by all who knew him. He was the funniest guy we knew, even if we didn’t always appreciate his “Dad” jokes. He was also the hardest working man alive, who taught his children a strong work ethic. Without a formal education, he was still the smartest guy in the room. He will be missed, beyond measure.

To order memorial trees or send flowers to the family in memory of James Turnbull III, please visit our flower store.