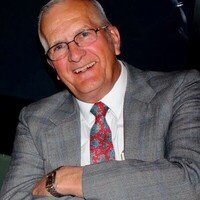 Our dear loving husband, father, grandfather, great-grandfather, relative and friend.  ‘J’ Brian Whitesides, died peacefully June 13, 2021, surrounded by loved ones in his home in Cottonwood Heights, Utah at the age of 86, after almost 10 years of fighting cancer.

J was born March 16, 1935 in Burley, Idaho to John Marion and Alice Chloe Barlow Whitesides.  Later his family moved to Salt Lake City where he attended West High School, played intramural basketball and enjoyed making many friends.  He met the love of his life, Marjorie Keyes (Marge) on July 3, 1952 at Safeway grocery store in the produce department where he later became the manager.  They later married February 1, 1955; marriage later solemnized in the Salt Lake Temple December 2, 1955.  They raised 6 children together.  He loved golf, traveling, reading, playing games with family and friends.  He retired from Metropolitan Life where he acquired his CLU certification and other accreditations.  He was an active member of The Church of Jesus Christ of Latter-day Saints holding various leadership positions serving others in countless ways throughout his life.  One of his greatest joys was serving a mission with his eternal companion in the Washington Tacoma mission for the church (1997-98).

He is preceded in death by his wife Marge; his son John Brent; his parents;  4 of his 5 sisters, Mary (Lloyd) Wright, Joyce (John) Campbell, Norma (Jack) Hanson and Jackie (Richard) Henderson.

Services can be viewed virtually at:  https://youtu.be/pBy_XWEgIP8

MY STORY BY ‘J’ BRIAN WHITESIDES

I was born on a Saturday, March 16, 1935, in a home that my father built on (his father’s) my grandfather’s 40-acre farm in Burley, Idaho. Born to John Marion Whitesides and Alice Chloe Barlow Whitesides. The street is now called Parke Ave. The home my father built was located almost exactly in the very spot that my cousin (Karen Ramsey) and her husband Art Ramsey now live in a nice brick home that they moved into after Karen’s parents died. Her parents were Catherine & Marion Thaxton.

I grew up till about 5 years with 5 sisters in my father’s frame home that he built. My father tried a little farming but not his favorite occupation. He started a creamery business where he purchased milk from the farmers and separated the cream and then sold the product to the dairy. When the creamery business dried up (Approx. 1940), my parents gathered us together and we moved to Salt Lake City, Utah. My parents were invited to move in and live with my aunt Clara and uncle Loyal Olson. (Aunt Clara was one of my mother’s sisters) This arrangement was to be at 735 South 900 East, next to Lowell Avenue. The home had one large kitchen and one bathroom and despite some tight living conditions. We had a total of 7 occupants and Aunt Clara had 7. We got along extremely well and we had special future growing relationships with one another.

We also had the Tower Theatre with 10 cent movies and Garden Gate ice cream store on 9th and 9th . Also, Liberty Park with all of its special activities about ½ mile away.

The home on 9th East was to be sold and my father had a co-worker (Ruth Sharp) and she told my father that there was a rundown duplex next door to them to the east of Sharp’s home. My folks were not afraid of the much work to the duplex to make it habitable, so we moved in approximately March 10, 1945.

I got my first real job at Grangers Market on first south and Jeremy Street. As a bottle boy I took all the return deposit and placed them in proper cases for pickup. Grangers moved to the old 8th West in a new building about 80 South on 8th West (9th West now) and later the Grangers Market was moved to Rose Park.

This is where I met my future wife Marjorie Keyes. It was a romantic moment as I took her to get some firecrackers. Our relationship flourished and we were married on February 1, 1955 in my sister Joyce’s and brother-in-law Johnny Campbell’s house at 935 Autumn Avenue in Rose  Park. We met with Bishop Thomas Hall of the 34th ward. (whom we had great respect and love for) Riverside Stake. He counseled with us and helped us realize the importance of a special relationship with our Savior and we ended up getting our marriage solemnized in the Salt Lake Temple Dec. 2, 1955. In July 1959 we moved into our first starter home at 742 South Post Street in 26 th ward. Pioneer Stake. We met many new friends there. Bishop David Stanley and  Annette Stanley were special friends and he was our Bishop for a time there. We bought a home with more bathrooms than one and 3 bedrooms for our growing family. 1793 East Meadow Downs Way in the 5th ward. Butler West Stake. In an area called Greenfield Village.

After a few years there were boundary changes and we were transferred to 10th ward (Butler West Stake). Church activity was always a high priority for Marge and I. We continued to serve in various callings in our church. We both served a mission in Washington State (covering about 4 wards and branches) around Aberdeen, Washington, Raymond, Ocean Shores, Grayland and West Port areas.

I decided that I needed a change of occupation and I went to San Francisco in July of 1960 for agents training. Metropolitan Life Insurance Company. (later shortened to Metlife) I worked at Metlife nearly 40 years and retiring April 12, 1997.

I have served in teaching positions in Sunday School & Priesthood callings, Scoutmaster on 2 occasions. I served in 4 Bishoprics, including Bishop from 1991 to 1996. I served a mission with my wife in Washington State 1997-1998.  Your greatest happiness & satisfaction in life will come when you serve others. That’s my story and I’m sticking to it!

All above are deceased including parents Carol Ann (Larry) Fuller are surviving siblings.

Many thanks to my friends and family who looked after my needs and wants. Utah Cancer Specialist, Dr. Call, Rick Hansen, Debbie, Dr. Tom Skidmore and associates.

To send a flower arrangement or to plant trees in memory of "J" Brian Whitesides, please click here to visit our Sympathy Store.

To order memorial trees or send flowers to the family in memory of "J" Brian Whitesides, please visit our flower store.