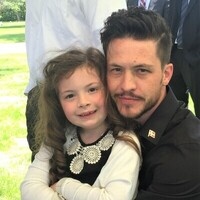 Right before Christmas, 1981, Dad quickly closed the door on the freezing wind as they entered the little house in Birdseye, Montana.  An eagerly waiting Ian and Malia searched for their new little brother among their bundled parents’ layers of coats, scarves, hats, and mittens. With rare delight, Mom bent down and presented Isaac, swaddled in a red Christmas stocking!  His birth had been especially difficult for Mom, and the price she paid in getting him into the world made him all the more cherished to her.

Isaac’s physical strength was evident early on, as he’d climb the afghan that draped the sofa before he was even able to walk.  Equally apparent was how appropriately he’d been named.  Isaac’s name means “he laugheth”; and Isaac’s laugh, smile, voice, and native cheery disposition brought a unique joy to the family.  Throughout his life, Isaac drew people to him by making them laugh and feel comfortable around him.  True gifts.

One of Isaac’s favorite memories of experiences shared with his little sister, Annie, was catching a dead fish at a campground on the banks of the Snake River in Idaho Falls during the family’s final vacation together before the onset of Annie’s degenerative neurological condition that introduced complexity to opportunities for shared family activities.  How they prized their catch!

Ike was an excellent soccer player during his elementary school years; and he was a formidable and respected wrestler in junior high school, often telling the guy he was pinning, “Sorry, man, but I gotta do this.”

Isaac was a voracious reader and had a nearly photographic memory.  He could recite from memory—often days, weeks or months later—paragraphs of text after having only read them once or twice. From the first grade on, he impressed teachers and students alike with his recitations of Lewis Carroll’s “The Jabberwocky.” Isaac’s Granger High School Junior English teacher, Mr. Crooks, was gobsmacked; and, had it confirmed at once that Isaac could, indeed, be Ian and Malia’s brother once he launched into all seven quatrains of “’Twas brillig, and the slithy toves / Did gyre and gimble in the wabe…”

Art teacher Mr. Smith at West Lake Junior High School helped begin to refine Isaac’s artistic talents that had already been nurtured in the abundantly creative atmosphere of his family home.  In high school, Mr. Wright revealed to Isaac the worlds of videography and graphic design.  He ultimately blended those interests and skills in his successful career as a graphic designer.  During his years of working in print media, Isaac had an uncanny ability for calibrating color on the Media One presses.  In recent years, Isaac taught himself to code as part of advancing his career in the digital advertising realm.  He held a bachelor’s degree from Weber State University, which he earned while being a husband and father and while working full-time and managing lengthy commutes.

Isaac served a Spanish-speaking mission in San Diego, California, for The Church of Jesus Christ of Latter-day Saints.  Isaac shared a mutual, brotherly love with his mission companions, the people he taught, and the members of the Church in California, as evidenced by the tone with which he talked about those people and stayed in touch for years after his mission.  Isaac spoke excellent Spanish, and in a way that showed his fondness for those from whom he learned the language—and whose food he greatly enjoyed.

Isaac married Emily Gibson after his mission.  Together they brought into the world their beloved Willow.  Isaac described “feeling taller than all the doctors in the hospital” the day she was born!  His concern for and doting on Willow never ended—and never will.

Isaac loved wildlife—especially birds and hippopotami.  He watched and read National Geographic with rapt attention from early childhood.  He could identify scores of Utah birds by sight and by their calls.  He loved camping, hiking, and the solitude and refreshment of nature.  Isaac loved Utah’s mountains and had climbed many of their peaks.

Isaac loved working with wood.  He inherited this talent from his father.  He loved being creative during his years working at Canyon Craft Cabinets where he did specialty work.  Three particularly beautiful creations stand out: a valence in Mom’s living room, a matching side cabinet, and a lovely jewelry box he built for Emily.  Though not a woodworking project, Isaac and Willow’s “Cabinet of Curiosities” is another noteworthy creative endeavor.  The glass-encased table holds memories and treasures ranging from seashells to ceramic birds to coins to garnets panned for by his maternal grandmother in Montana’s Ruby River.

Perhaps due to his Montana roots, Isaac had a great respect for Native Americans, their history and culture.  Isaac drew and painted many dramatic, noble images of our land’s first people.  He considered these some of his greatest works.

Though he had taken childhood piano lessons, Isaac came into his pianism as a young adult.  He played a book of Rachmaninoff transcriptions with special awe and pleasure.  He found numerous gems for the piano in unheard of films and other sources, he was no slouch as a trumpeter in the school band, and he was cool enough to also play a little guitar.

How would one begin to list all of Isaac’s friends?  Isaac maintained regular contact with childhood, mission, college, and professional friends from year to year.

Isaac faced emotional, mental, and chemical challenges during the final decade of his life.  In spite of the great love felt for him by so many, Isaac experienced profound loneliness and struggled in feeling equal to life challenges.  In spite of his many gifts, he often felt like he didn’t measure up to societal and cultural standards.  In recent months, Isaac sought professional help.  His early death reminds us of the need to resound the truth that Isaac’s worth is infinite and absolute.  He is cherished by his Creator, and he will forever be loved by his family and friends.

Resting on Isaac’s nightstand is a copy of the Upanishads. The Katha Upanishad says, “The knowing self is not born; it does not die. It has not sprung from anything; nothing has sprung from it. Birthless, eternal, everlasting and ancient, it is not killed when the body is killed.”  We trust that Isaac is free from the trappings that prevented him from being his real self that we were grateful to know earlier in his life.  To Isaac’s anxiety over the justices and injustices of mortal life, we respond with renewed commitment to proclaim hope, mercy, and love.

No public service will be held.

To send a flower arrangement or to plant trees in memory of Isaac Lemoine Christensen, please click here to visit our Sympathy Store.

To order memorial trees or send flowers to the family in memory of Isaac Lemoine Christensen, please visit our flower store.