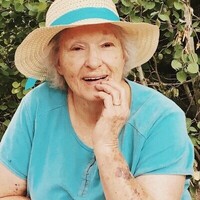 Ina was extraordinary.  She was a fun loving, joyful person who loved life and those lucky enough to know her felt that love immediately.  She loved her family and worked hard and sacrificed much to give them the best life she possibly could.  She was so excited to become a grandmother and helped raise each and every one of her grandchildren.  Because of that she had a very special relationship with them.

Born on December 10, 1934, to Thomas Victor Keele and Edna Christina Sorensen Keele her father quickly gave her a name and blessing because the midwife didn’t know if she would survive.  But Ina proved she was strong and a fighter.  She was later blessed again at church, and it was there she was given the middle name Vee. She grew up in Emery, Utah and was the second youngest of 8 children.  She had a wonderful childhood filled with music, especially using her beautiful voice, theatre, adventure, and challenges.  She was full of life, had an impish sense of humor and sought out fun wherever she was.  She met the love of her life, Bill, at a Fourth of July Celebration and they were married for time and all eternity on October 15, 1954, in the Manti Temple.

Six weeks after their wedding, Bill left for a 3-year mission in Japan for The Church of Jesus Christ of Latter-day Saints.  While he was gone, Ina took it upon herself to learn how to cook Japanese food so she could make it for him when he returned.  Because of this, all her posterity grew up with a love for Japan, especially the food.  She worked as a teller at Carbon Emery Bank while he was gone and was able to financially support Bill on his mission and save enough money for a car and a home.  Not long after Bill returned, they welcomed their first baby, and built their lifelong home in Kearns, Utah where they welcomed three more children.

A faithful member of The Church of Jesus Christ of Latter-day Saints, Ina served in many callings in the church including the Relief Society, Young Women’s, Primary and Cub Scouts.  Alongside her husband, she was an ordinance worker in the Jordan River Temple for many years. She served with her whole heart and taught her children to love God. She had a strong faith in God and His power to heal both hearts and bodies. A faith she grew through the many health challenges she faced throughout her life, including an extremely rare blood disease.

She was a Christlike, service-oriented woman who always had a listening ear.  She was eager to hear about your day, share popsicles with the neighborhood, talk about fashion (she was quite a fashionista!) recount funny stories from her childhood, sing songs and dance in the kitchen with you, feed you her famous crepes, wipe away tears and always remind you that you were loved. She had a great sense of humor, was a fantastic storyteller and was quick to laugh.

She leaves behind an incredible legacy, and we will miss her terribly.  We love you!

We would like to thank family who helped provide physical care and support for Ina as well as Samantha who was an incredible advocate and end of life hospice provider.

To order memorial trees or send flowers to the family in memory of Ina Vee Keele McElprang, please visit our flower store.