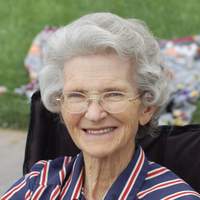 Idonna Hunt Cook, age 92, passed away peacefully surrounded by family on December 26, 2019, in Riverton, Utah.  She was born May 25, 1927 in Blanding, Utah, the first of seven children born to Alfreda Ellen Rowley and Joseph Clarence Hunt.

Idonna began piano lessons at age seven and became an accomplished pianist.  In later years, when asked to play in church services, she took organ lessons and served as pianist or organist in many organizations.  She played clarinet in her high school marching band and was the drummer in a community band in Blanding.  Idonna accompanied her dad while he played the violin, and often played for parties, choirs, soloists and other groups throughout her lifetime.  She began teaching piano lessons at age sixteen and continued into her eighties.  Two days before her passing, Idonna played the piano beautifully at a family Christmas party.

Idonna married her eternal sweetheart, William Richard Cook, in Elko, Nevada on Armistice Day, November 11, 1945, shortly after Bill returned from overseas duty.  He was a flight engineer with the 460th Bomb Group, stationed in Italy during World War II.  Their marriage was later solemnized in the Manti Temple on June 11, 1946.  Idonna and Bill did everything together and were never far apart—they made a great team.  They built three houses in Salt Lake City, where they lived until 1981, and one house in Blanding, Utah, where they moved after Bill retired from the Utah Highway Patrol.  Idonna became skilled at finishing sheetrock, painting, staining, varnishing, and sewing lovely coverings and draperies for their homes.  Their yards were always a showpiece, with colorful flower beds, vegetable gardens and orchards.  Idonna loved sharing her flowers, produce and homemade bread liberally.  She and Bill also enjoyed remodeling and refinishing many home improvement projects for their children.

Idonna was a member of The Church of Jesus Christ of Latter-day Saints.  She served in numerous capacities including Relief Society president, counselor, teacher, music chair, and more.  Idonna and Bill completed Church missions in Nauvoo, Illinois and at the Church History Library in Salt Lake City, Utah.  She was an accomplished historian and wrote three books: one on her grandfather, John LaRay Hunt; one on her parents, Joe and Freda Hunt; and one documenting her own life history.  Idonna enjoyed sunsets, playing the piano, swimming, writing, temple and family history work, traveling, sight-seeing, fishing and hunting with Bill, and serving others.  Idonna always said her greatest accomplishment was her family.

Shortly after Bill passed on June 9, 2014, Idonna moved from Blanding to live with her daughter Freda and husband Doug Smith in Herriman, UT.  They treated her like a queen and she was very happy there.  The family will be forever grateful to Doug and Freda for their love and selfless service.

Additional services will be held on Saturday, January 4, 11:00 a.m. at the Blanding South Chapel, 200 S Main, Blanding, Utah, under the direction of San Juan Mortuary, with interment at the Blanding City Cemetery.  There will be no public viewing.

To send a flower arrangement or to plant trees in memory of Idonna Hunt Cook, please click here to visit our Sympathy Store.

To order memorial trees or send flowers to the family in memory of Idonna Hunt Cook, please visit our flower store.