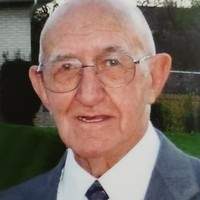 It is with a heavy heart and a peaceful spirit that we announce the passing of one of our Heavenly Father’s loyal servants. Howard Norton, age 98, passed away March 31, 2020 at his home in South Jordan, Utah.

Howard was born on October 20, 1921 to Robert William Norton and Tyresha Orilla Myers Norton in Panguitch, Utah. Howard was one of 18 siblings, who came from the uniting of the Norton, Bolton, and Wilcock families. Dad’s love for each of them was deep and without bounds.

Dad was married for time and all eternity to his only love, Betty, on February 14, 1947 in the Salt Lake Temple. He was a constant reminder to his children and all he came in contact with that Betty was his sweetheart and he would serenade her with sweet songs from their earlier years as a reminder of his boundless love for her. As the time for Dad’s passing drew near, sounds of familiar songs from a bygone era came from Dad’s bedside as Mom sang to Dad the tunes that brought them together in courtship and marriage over 73 years earlier. These moments seemed to solidify the great example of love that they blessed their children with over the years.

Preceding Dad in death were 16 of his siblings; and his son, Bryan.

Dad was an authentic man and one who loved his wife Betty and his family with all his heart. He served, loved and provided for them through his hard work and dedication to his chosen profession in the Heating and Air Conditioning trade. Dad found joy in providing and was a constant source of humility and inspiration to his family.

He also loved playing basketball, softball, and pitching horseshoes in his earlier years, along with hunting and fishing with his relatives and sons. Dad played the harmonica and blessed his posterity with melodies that each child has passed down to their children with smiles of their origin.

In his early years, Dad served in the Texas Louisiana mission of The Church of Jesus Christ of Latter-day Saints where he gained a fervent testimony of our Father in Heaven and of our Savior Jesus Christ. That experience led to many church callings throughout his life that he faithfully fulfilled; serving as a Bishop on two occasions, Counselor in the Stake Presidency, and High Counselor for many years in addition to other callings.

Within a few weeks of returning from serving the Lord in the mission field, Dad answered the call from a nation at war to serve in the United States Army during World War II and was thrust into the field of combat on the Villa Verde Trail to secure the liberation of the Philippine Islands. During his tenure with the military, he served in forward combat positions as a scout and demolitions man, going before advancing troops to assure their safety in their movements against enemy positions. It was in this role that he served with honor and valor; though he seldom would discuss or single himself above any other who served, he was awarded two purple hearts for injuries sustained in the field of battle. He was a member of the 24 Rifleman Company to whom the leadership of the Japanese military surrendered in June 1945. The formal surrender of the Philippines came later in Luzon, on September 2, 1945.

Dad would later remark concerning this time period of his life, that at “One minute we were at war with the enemy and with the wave of a white flag, we embraced them as friends” in attempting to rebuild lives destroyed by the human toll of war. It was this resolve and humility that made Dad an instrumental key in setting up and participating in the first convert baptism in Japan after the war was over, and later in the rebuilding effort of the lives and church while stationed in Japan following the formal surrender.

Dad was involved in serving the young men of the community through scouting and understood the value of teaching boys the skills to become men in hopes of creating future leaders through scouting and religious activity. He received several awards, of which one was a scouting council recognition of the Silver Beehive Award that was only given a few times. His actions in these organizations were small in comparison to the lives of those he touched during his time of service.

Dad and mother also served in the Albuquerque New Mexico mission in Kayenta, Arizona where they had many rewarding experiences with the Navajo people, whom they loved. Dad was a true man of God and one that will be deeply missed by his family and countless people from all walks of life that came in contact with him throughout his lifetime. He set an example for his family and all of those who knew him. By that example, he truly gained the admiration of friends, family and business associates. We know with an assurance that Dad was welcomed by many on the other side who he touched during his sojourn on this earth. We will miss our association with him but will keep his memory in our hearts forever.

A private service is planned for his children and their spouses with a memorial Celebration of Life to be scheduled sometime at a later date.

The family would like to thank all the family, ward members, members of the Veterans Administration who served him, and outstanding friends who have expressed their support and condolences at this time.

To send a flower arrangement or to plant trees in memory of Howard Norton, please click here to visit our Sympathy Store.

To order memorial trees or send flowers to the family in memory of Howard Norton, please visit our flower store.