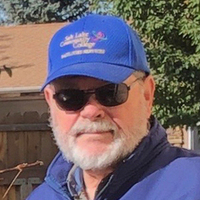 On Sunday July 26th ,2020 the world lost a great influencer. Grant Giles Gardner quietly influenced the lives of thousands of people through his church service, the Boy Scouts of America, his working career, his ham radio enthusiasm and his passion for emergency preparedness.

Most of all, he had a positive and lasting influence on his family. Grant and Verla were married for 45 years. They met and dated while each attended Brigham Young University. Together they have and raised 4 children (Jay & Shanna)(Gretchen)(Stephen & Kacey) (Annalisa & Mike). Grant was always very proud of his children and played a pivotal role in each of their lives.

Nothing made Grant happier than being a Papa to his 4 grandchildren (Gavin, Halle, Julia and Wyatt). Each of his grandchildren spent quality time with Papa and learned many life skills at his side. As one of his final happy memories, Grant and Verla threw a birthday party for Grant and grandson Wyatt where everyone dressed up as cowboys and cowgirls. Grant even had a pony brought in for the grandchildren to ride. Ironically, the first gift he gave a grandchild was a rocking horse and his last gift was a real horse.

Grant showed his love to his family and community through service and by giving his time. He didn’t often say the words, “I love you”, but he regularly showed the words I love you. He lived by the words ‘Do Good Today’ and seemed to live by them on a daily basis.

During Grants life he played baseball, served honorably in the Army, graduated from college, raised a family, enjoyed photography, helped many young men in the Boy Scouts program, served alongside his wife Verla in life and in church callings and helped thousands of people become emergency prepared.

The last few years of Grant’s life carried many health issues and side effects. Yet, he showed a great example of living with dignity and grace under pressure.

Grant was born on July 10th, 1949 to Father, Edward Lovell Gardner and Mother, Lucille Pratt Gardner. He was raised outside of Los Angeles. He proudly served in the US Army for 5 and half years. He was a proud Veteran and loved the American flag.

After returning from oversea, Grant attended Brigham Young University, where he received a Bachelor of Arts degree. During his time at BYU, he made the best decision of his life and married Verla Jeanne Cole.

His viewing will be held on August 6th from 6-8 pm at McDougal Funeral Home,4330 So. Redwood Road. His funeral will also be at the Funeral Home, Friday August 7th at 11:00 am. Seating and attendance are limited because of the Covid gathering restrictions.

His burial will follow at Utah Memorial Park & Cemetery at Camp Williams, 17111 South Redwood Road, in honor of his time served in the US Army.

To send a flower arrangement or to plant trees in memory of Grant Giles Gardner, please click here to visit our Sympathy Store.

To order memorial trees or send flowers to the family in memory of Grant Giles Gardner, please visit our flower store.