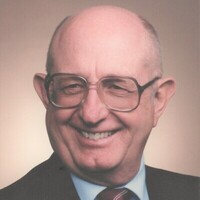 Glade Almon Johnson, 94, passed away on Thursday, November 18, 2021, with his beloved sweetheart, Betty, by his side.

Glade was born July 10, 1927, in Spring Lake, Utah to Guy Amos and Inez Henrietta Christensen Johnson. He grew up in Payson, Utah and graduated from Payson High School in 1945. He wrote in his autobiography that his mother knew he could sing at an early age and put him on stage at the age of 5 where he sang “Springtime in the Rockies” and he enjoyed performing the rest of his life.

Glade served in the Navy and Naval Reserves for a total of 10 years, joining the Navy immediately after high school graduation. He attended Brigham Young University, studying Music and German. While there he played trombone in the BYU Marching Band and was in the band the first time that they performed the Cougar fight song at a football game. He also enjoyed playing with the band when they performed a concert at Zion National Park. After college Glade was a professional musician in dance bands where he sang and played the trombone or the bass.

In Laramie, Wyoming, 1952, he met his lovely wife, Betty Louise Brettell. They were married August 15, 1953, and this year they celebrated their 68th anniversary. Together they lived in Madison, Wisconsin, Salt Lake City, UT and in 1956, moved to Kearns, UT where he lived the rest of his life. Glade worked most of his career as Sales Manager and Executive Vice President of Control Equipment Company in South Salt Lake.

Glade served in many callings for the Church of Jesus Christ of Latter-day Saints. Some of which were Stake MIA, where he participated in an Explorer Scout excursion fishing for salmon along the Columbia River in western Oregon. He also served as councilor in two bishoprics, a Bishop, Stake High Council Member, Councilor in Stake Presidency and Stake President for the Kearns Utah North Stake. He also served as ward choir director, Sunday School teacher and a teacher in Priesthood Quorum. In 1997 Glade, along with his wife Betty, were called to serve a mission in the Chicago Temple. He served as a Sealer there as well as in the Jordan River Temple after he returned from his Mission.

Glade was a member of the Barbershop Harmony Society (aka S.P.E.B.S.Q.S.A.), singing and competing with the Beehive Statesman Chorus for about 35 years. He also loved singing in several barbershop quartets, beginning in high school. His quartet, “Achey Breaky Parts” won Rocky Mountain District Senior Championship in 2001. For a short time, he was also the director of the Skyline Chorus in Provo, Utah.

Glade loved being with his family, music, singing, playing bass, bow hunting, golf, and traveling by car, plane, and camping. He also loved ice cream. One of his favorite phrases was, “The best time to eat ice cream is when you’re alone or with somebody.” His favorite books were the scriptures, Moby Dick, Ben Hur, and A Christmas Carol. His favorite movie was Jeremiah Johnson, and his favorite Christmas song was, “The Christmas Song”.

Glade had a strong, lifelong testimony of the gospel of Jesus Christ and loved our Heavenly Father and Jesus Christ deeply.

Glade was an exemplary, highly respected, and honorable man, husband, and father. He was a man of high moral character, integrity and honor who was kind and loving and had a great sense of humor. He was a wonderful example to all who knew him. Quoting a song he sang when he performed in dance bands, “A good man is hard to find.”  He will be missed, yet we know that he is now joyful as he is reunited with the many family members and friends who have gone before him.

Glade was preceded in death by his parents, his three older sisters, Pearl Buchholz, Joyce Cloward, and Anna Marie Badham, his younger brother, Keith Johnson, their spouses, and a sister-in-law.

The family would like to express our sincerest appreciation to our dear brother Keith for his constant and loving service to both Glade and Betty as they have encountered many struggles over the last several years. We love you with all our hearts!

We would like to recognize the staff at the VA Hospital in Salt Lake City for their care of Glade for many years, especially the last two years after his cancer diagnosis. We would also like to thank the Holladay Healthcare Center for their care of Glade and Betty for the last month. We especially express gratitude to nurse Vickie, who witnessed Dad’s last breath and helped Mom to her chair so that she could hold his hand.

To attend virtually at:

Interment will be at the Payson City Cemetery.

To send a flower arrangement or to plant trees in memory of Glade A. Johnson, please click here to visit our Sympathy Store.

To order memorial trees or send flowers to the family in memory of Glade A. Johnson, please visit our flower store.