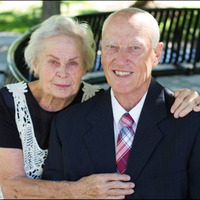 Gerald (Jerry) Lynn Larson, age 86, quietly passed away on the afternoon of January 6, 2021. He was born September 18, 1934 in Granger, Utah to Lester Oscar Larson and Bessie Ardell Petersen. He lived his whole life on the same acre where he was born, building a home next to his parents.

He met the love of his life and happily married Patsy Carlene Solomon in the Salt Lake Temple on August 8 , 1956. The two of them raised five children in the home that Jerry built.

Mom and Dad gave us a lot of room to run and play between the two large yards, living next door to Grandma and Grandpa Larson. He loved camping and being in the outdoors and was a top-notch Scoutmaster for his two boys and many others, teaching them a respect and love of nature and the outdoors and helping them and most of the boys that he led, to earn the rank of Eagle Scout.

He taught us all how to work by involving us in a part time job that they had cleaning the First Security Bank in Magna on Main Street four nights a week and on Saturday mornings. We were each paid .10 cents a night for our work and were extremely excited when we got a raise to .25 cents a night.

He was well known in the community of Granger, Hunter and Magna and had many friends and family that knew and loved him.

He was very involved in The Church of Jesus Christ of Latter-day Saints serving in many different positions including Bishop of their ward and raised his family by example and teaching them a belief in and love of God.

He eventually was able to retire in 2000 and then he and his wife served a mission in the Harrisburg, Pennsylvania Mission where he was called to be the first Branch President of the Susquehanna Branch which included the area where Joseph Smith and Oliver Cowdery were baptized and translated a large portion of the Book of Mormon.

Jerry was preceded in death by both his parents, Les and Bessie Larson; his older brother, Kenneth Larson; his two sisters, Marylynn Davis and Jackie Campbell; his son, Jerald Trent Larson; his daughter, Jennifer O’Brien; and son-in-laws, Ron O’Brien and Chad Durfee.

He is survived by his son Tracy (Valerie) Larson; his two daughters, Jill (Chad) Durfee and Janene (Sean) Ujhely; 12 grandchildren; and 27 great-grandchildren with more greats on the way.

We will have a brief graveside service for Dad on Thursday, January 14, 2021 at 2:00 at Valley View Cemetery. For obvious reasons this will be mostly for Family. We deeply regret not being able to see everyone that knew dad. We recognize that we could easily fill the whole cemetery with all the friends and family, and we know that if possible you would all be there.

Thank you all for your prayers during this time. We would like to salute the Hero’s that have been taking care of Mom and Dad at Sunridge Assisted Living. They have been awesome to work with. They’ve always kept us informed of everything that happened to Mom and Dad and have called us when they had a fall. Sunridge and Kalai (manager) have a top notch assisted living environment that I happily recommend to anyone.

We also want to thank the Nurses, CNAs and directors that work at Stonehenge of Orem. They do an incredibly difficult job of taking care of elderly patients who have tested positive for Covid-19. Mom and Dad were only there a short time and were loved by those who worked with them. Thank you very much, to both Care Centers.

To send a flower arrangement or to plant trees in memory of Gerald Lynn Larson, please click here to visit our Sympathy Store.

To order memorial trees or send flowers to the family in memory of Gerald Lynn Larson, please visit our flower store.