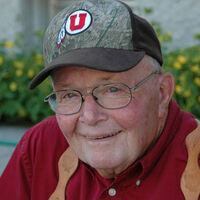 Father, grandfather, great-grandfather, and friend, Gerald B. Frame, passed away June 6, 2021.
Jerry was born in Salt Lake City, Utah, September 26, 1931 to Donald Dick Frame and Relia “Dolly” Balls. Jerry grew up in Taylorsville Utah. He was 18 when he enlisted in the Navy. He served four years during the Korean War as a Boatswain Mate 3rd Class. After returning home, he followed in his father’s footsteps and became a meat cutter. He married his sweetheart, Marlene LaRue Jones on June 13, 1956. They had 3 sons Curtis, Kevin and Chris, and 1 daughter, Kimberly. They were sealed in the Salt Lake Temple on September 26, 1969. After retiring, he worked as a caretaker at the Taylorsville Cemetery. In 2018, at 87 years old, he decided it was time to slow down a bit and stopped working at the Cemetery.  He loved playing and coaching baseball, fishing, hunting, woodworking, and leather crafting.
Jerry is survived by his wife Marlene; children, Curtis (Lisa), Kevin (Martha), Chris (Sharon), and Kimberly (James); 8 grandchildren; 8 great-grandchildren. He is preceded in death by his parents and brother.
Heartfelt thanks to Rocky Mountain Home Care and Hospice.
A viewing will be held Wednesday, June 9 from 6:30 to 7:30 p.m. at the McDougal Funeral Home 4330 S. Redwood Road, Taylorsville, UT. Graveside services will be held Thursday, June 10 at 11:00 a.m. at the Redwood Memorial Cemetery 6500 South Redwood Road, Taylorsville UT.

To send a flower arrangement or to plant trees in memory of Jerry B. Frame, please click here to visit our Sympathy Store.

To order memorial trees or send flowers to the family in memory of Jerry B. Frame, please visit our flower store.