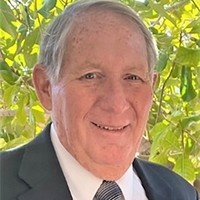 After a brief but valiant fight with Pancreatic Cancer, George completed his earthly mission on Thursday, March 12, 2020.  He passed away peacefully, surrounded by his loving wife and family.

George William Hicks was born October 13, 1947 in Los Angeles, CA, to George Hicks and Eda Prantil.  The moment George learned to walk, he could almost always be found on any nearby baseball field, emulating players from his favorite team, the LA Dodgers.  When George wasn’t busy pitching, he was at the beach in Venice playing volleyball, or busy counseling youth at scout camps. George graduated from BYU with a Bachelor of Science and obtained a master’s degree from the University of Utah in Education. He served an LDS mission in the Central Atlantic States.  After his mission, he returned to BYU and met the love of his life, JoAnne Butler. They were married in the Salt Lake Temple on May 26, 1971. Throughout his career he enjoyed teaching math in junior high, high school and later at the collegiate level. He also spent several years as a computer systems analyst and project manager at various healthcare companies.

George’s self-proclaimed greatest accomplishment was becoming a father to his three sons.  He excelled as a father, and never took this “job” lightly. He coached his sons in as many sports as he could, but baseball was always his first love.  His love of coaching youth left lasting impressions on so many young athletes who looked up to him. He was a dedicated father and coach.

George was a faithful and active member of The Church of Jesus Christ of Latter-day Saints.  He served in multiple church callings throughout his life and left his love and testimony with all those he served. He was an amazing speaker who always tried to find ways to connect to the youth he served through stories they could relate to.

George was not only an amazing father, but a doting grandfather.  One of his favorite things was the annual grandkids trip to Lake Powell and other sunny destinations.  He loved to attend their activities whether it be musical, sports, dance, etc.

A short graveyard service will be held on Saturday, March 21st, at the West Jordan City Cemetery on 7925 West 1300 South in West Jordan at 1:00 PM.

Due to the current health concerns, we understand that you may not feel comfortable attending the graveyard service. Our love is with you just the same. We would like to invite you to a celebration of his life to be held once the current crisis is under control.

In lieu of flowers, please make a donation to the NixonStrong Cancer foundation in support of finding a cure to childhood cancer. Nixonstrongfoundation.org

To send a flower arrangement or to plant trees in memory of George William Hicks, please click here to visit our Sympathy Store.

To order memorial trees or send flowers to the family in memory of George William Hicks, please visit our flower store.