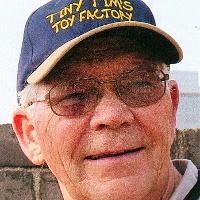 Our sweet husband, father and grandfather passed away at home on Saturday August 24, 2019 after a long and valiant battle with cancer.

Born July 4, 1936 to Alfred Riley and Vera Elizabeth Andersen Wilson in Provo, Utah. Gene was raised by his Uncle Lloyd and Carma Andersen after the untimely deaths of his parents.

After high school, Gene served three years in the United States Navy aboard the USS Caliente as a Machinist Mate. He then served a mission for The Church of Jesus Christ of Latter-day Saints in the Great Lakes Mission. After his mission, he took higher education training in vocational diesel mechanics and technical engineering at Brigham Young University, putting himself through school by lumber jacking and a tree trimming business.

Gene was a hard worker and after 28 years retired from Fairchild Semi Conductor as an Environmental Control technician. He also continued with his tree trimming business and had his own wheel weight business.

The things that will always remind us of Dad, include camping trips, gardening, fishing, drying apples, four wheeling, and pancakes.

After retiring, Gene’s hobby the past 18 years has been making and giving away Tiny Tim Toy cars. Gene and Delayne traveled the world handing out cars to as many children as they could. Nothing made Gene happier than putting a smile on someone’s face. Dad always said that “a smile in any language is the same”.

Gene loved to serve and anyone who knew him is the better for it. We love you Papa - till we meet again!

A special thank you to CNS Hospice and all the many friends and neighbors who have been supporting us through this difficult time!

To send a flower arrangement or to plant trees in memory of 'Gene' Alfred Eugene Wilson, please click here to visit our Sympathy Store.

To order memorial trees or send flowers to the family in memory of 'Gene' Alfred Eugene Wilson, please visit our flower store.