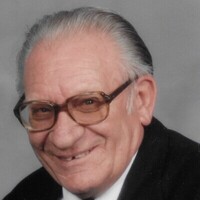 Eugene Howard May, “Gene”, peacefully passed away on December 29, 2021 in Iuka, Mississippi. Gene was born May 11, 1927 and was the youngest of five boys of George E. May and Jemima Durant May.

He grew up on “Marmalade Hill” in Salt Lake City, Utah and graduated from West High School in 1944. During World War 2, he served as seaman first class in the US Navy where he was stationed in Shanghai, China. Following his honorable discharge, he was called to serve a mission for The Church of Jesus Christ of Latter-day Saints to the Central Atlantic States Mission where he served primarily in North Carolina and Tennessee.

Prior to his mission, he met Clarice Hamp and they corresponded while he served. Upon returning, their romance blossomed, and they were sealed for time and eternity on June 30, 1950 in the Salt Lake Temple. During their earthly marriage of 68 years together they were blessed with three children: Allison Bath (Kent), Iuka, MS, Steven May Salt Lake City, UT, Kenneth May (Karen) West Valley City, UT; eleven grandchildren: Brian Bath, Brandon Bath (Eden), Adam Bath, Aaron Bath (Christy), Eric Bath (Camile), Logan May, Saige May, Stacey Keiser (Josh), Christopher May (Tiffany), Tammy Darger (Kevin), Breanna May; and 10 great-grandchildren.

Gene enjoyed all sports and was an avid BYU fan. He was a hard-working provider for his family, putting in long hours. He worked as a letter carrier and also ran his own business. He and his wife enjoyed playing canasta, card games of all kinds and jigsaw puzzles. In his later years he cared for Clarice during the last 2 years of her life. She passed on Christmas Eve 2018, and he missed her every day.

He was an active member of The Church of Jesus Christ of Latter-day Saints and served the Lord in various positions.

Preceded in death by his wife; parents; and brothers: Rulon May, Ralph May, George R. May and Wilbur May.

Many thanks to his niece Karen Fulmer for her service to Mom and Dad in their later years and to Jamie Ballard who was more than a caregiver. Thanks also to North MS Home Health for their attention and care during the last two years of his life.

Gene will be laid to rest next to his beloved wife at Memorial Estates, Taylorsville, Utah. A limited family service will be held.

To send a flower arrangement or to plant trees in memory of Eugene H. May, please click here to visit our Sympathy Store.

To order memorial trees or send flowers to the family in memory of Eugene H. May, please visit our flower store.