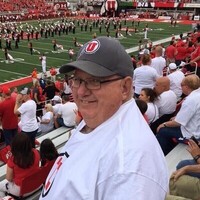 Gayle Stanley Burke passed away peacefully in Salt Lake City, Utah on May 1st at the age of 73. He was born on September 29, 1947 in Murray, Utah to Pearl and Truman Burke. He graduated from Cyprus High School in 1966. He served a church mission in the Southwest British Mission. He married Kandy Burke in the Salt Lake Temple on February 14, 1969. Gayle worked for Trane Company, Whittle Communications, and Jordan School District throughout his career. During 52 years of marriage, the couple welcomed 6 children, 23 grandchildren, and 5 great-grandchildren. Gayle set about teaching them his hard work ethic and love of sports. His children remember him as a hardworking and humorous father who encouraged them to pursue their goals.

Gayle was accomplished at basketball, baseball, and telling a good joke. He was a Utah man through and through and attended as many University of Utah sports events as he possibly could. He was also a dedicated individual who loved serving his neighbors, family, and friends and who was passionate about his faith. He was an active and dedicated member of The Church of Jesus Christ of Latter-day Saints and often volunteered at youth and scout camps.

All are welcome to attend and celebrate Gayle’s life.

The family would like to thank KPC Promise Hospital and St. Mark’s Hospital for their care.

Family and friends may attend virtually:

To send a flower arrangement or to plant trees in memory of Gayle Stanley Burke, please click here to visit our Sympathy Store.

To order memorial trees or send flowers to the family in memory of Gayle Stanley Burke, please visit our flower store.