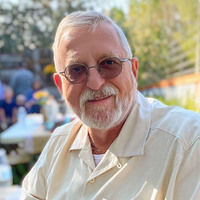 Gary Dean Ludvigson was born June 29, 1952 at the Tooele Army Depot in Tooele, Utah to Clinton and Lenora Ludvigson. Gary was unexpectedly taken from us in his sleep on July 1, 2021, at the age of 69, while doing what he loved; road tripping with his beloved wife of 48 years, Jolene Louise Ludvigson, in their motorhome in Steamboat Springs, CO.

Growing up in Glendale, Utah with siblings Kirby, Terry, Paula Cloward, and Cathy Reed; Gary was surrounded by the classic late 1950’s and 1960’s suburban American childhood. He met his soulmate, Jolene, in the Summer of ‘69 and later graduated from South High in 1971. Gary and Jolene married on June 8, 1973; they had 3 beautiful children and were later sealed in the Salt Lake City Temple on March 14, 1992.

He deeply admired and looked up to his father in-law, Earl Cheney, and followed in his footsteps in becoming a career electrician; completing his education at Trade Tech. His early working days found him at Granite School District, Hoyt Engineering, Huish Chemical, countless side-jobs, and then retired after 28 years of service at Kimberly-Clark. He was an incredibly hard worker that found joy in his craft and a job well done; many neighbors and friends will attest to his willingness to help with any kind of problem or project.

Gary loved spending every moment he could with his family; he was one of the last true family men. The capstone that reinvigorated the last stage of his life was his grandkids. After his 3rd grandchild was born, he and Jolene watched the new baby a few times a week and Gary would regularly shut off Jolene’s alarm so that he could spend some special time with his new grandson. That’s the kind of man Gary was, and the type of thing Gary did; he was sneaky thoughtful.

From very early on, Gary loved the road and traveling to new places; first the red van (The Beast), then the yellow van, then a travel trailer, and later their motorhome. He had a contagious laugh and a broadly diversified love of music that always filled vehicles or the basement for a crazy dance session with his Three Little Toads. Passionate about trains, airplanes, history, movies, and his ’71 Camaro; Gary had a charm in which he could carry on hour-long conversations about almost anything with just about anyone.

Gary will be missed by many and is survived by his wife Jolene; children Zachary (Clarissa), Katie Miller (Gregory), Joshua (Shannon); grandchildren Milo, Finnley, and Gavin, along with numerous extended family members.

He is preceded by his parents, Clinton, and Lenora; and brother Kirby.

Gary loved to laugh and always had a great time – the family would appreciate any personalized stories to be shared in the comments section.

To send a flower arrangement or to plant trees in memory of Gary Dean Ludvigson, please click here to visit our Sympathy Store.

To order memorial trees or send flowers to the family in memory of Gary Dean Ludvigson, please visit our flower store.