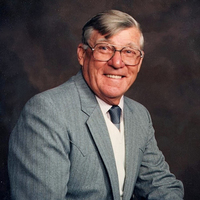 He attended school in Salt Lake City, Utah. He married Helen May on December 1, 1950 in Elko, Nevada. He worked as a Car Inspector for Union Pacific Railroad for 42 years. He was a veteran of the Army Air Corp, World War II, serving in Panama, Japan and the Philippines. He served from November 4, 1941 - January 14, 1946.

Carl is preceded in death by his wife, Helen; his parents; son-in-law; and several siblings.

The family of Carl wishes to extend our sincere thanks to Encompass Home Health and Hospice and the staff of Golden Living Center for the tender care offered to our father over the past 4 years.

To send a flower arrangement or to plant trees in memory of F Carl Nelson, please click here to visit our Sympathy Store.

To order memorial trees or send flowers to the family in memory of F Carl Nelson, please visit our flower store.