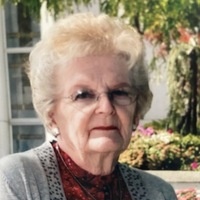 She grew up in Oakley, Idaho below the Oakley Dam.  She attended grade school at the Dam School (actual name), in Oakley, and loved all her Dam schoolmates and teachers.  She attended Oakley High School as well as Edmunds High School in Rexburg, Idaho.  She then attended Ricks College (now BYU Idaho).  She graduated, obtaining her teaching certificate and taught grades 1-4 at Edmunds Elementary School in the Rexburg area.

While attending college, she met the love of her life, Gordon Rock.  They were married in the Salt Lake Temple on June 1, 1944.

As Ethelyn often did with others, she helped Gordon see his full potential. Despite being sealed in the temple, it took him a few weeks to rid himself completely of his youthful taste for a drink now and then. His final bender ended with him throwing up in the back yard of their little honeymoon cottage with her leaning over him saying, “It serves you right, you darn fool!”

He took her gentle correction to heart and after that, straightened up and flew right.  They farmed in Rexburg then Monteview, Idaho, raising their 6 children.  They moved to the Salt Lake City area in 1963, where they remained.

While in Utah, she graduated from beauty school and styled hair in her small beauty shop attached to the back of the garage, to help make ends meet. Ethelyn was the greatest example of someone who lived a Christlike life.  As Gordon used to say, “She wouldn’t say s__t if she had a mouthful”.

She was preceded in death by her husband, Gordon Rock; daughter, Cindy Rock; son-in-law Dean Knight; granddaughter Jentry Rock; great-granddaughters, Avery and Kennedy Johnson; and great-grandson Knight Gibby. We are certain there was a great reunion on the other side.

In lieu of flowers, go tell a loved one how much you love them.  Ethelyn will be sorely missed. We surely look forward to seeing her again…but not yet.

To order memorial trees or send flowers to the family in memory of Ethelyn Nelson Rock, please visit our flower store.