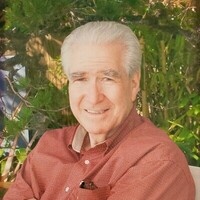 Elwood married Myrna Rae Kimber on June 27, 1955 and was blessed with three daughters and four sons, 29 grandchildren and 55 great-grandchildren. He often said family and church were his greatest treasures.

From an early age Elwood learned to balance hard work with pleasure. He played several types of sports in his youth while helping with responsibilities of the family farm.  Working on cars was a natural talent of his, especially older cars. Later in life he traveled to Canada to purchase a 1946 Chevrolet. His passion for restoring older cars spread to his sons and grandsons as they worked together on the “Old Chevy”.

Elwood operated his own trucking company, Norwood Transportation, which provided many opportunities for his family to work in the industry. Early in his career he also operated two gas stations where his mechanical abilities became well known. He had an impeccable work ethic and taught his family to do the same. He sacrificed so much of himself to help his family.

He also enjoyed fishing, hunting, playing horseshoes and any other activity that involved family. Each summer the extended Peterson family would gather for campouts or days at the park where he emphasized the importance of family. This annual event has continued for 35 years. His example of making family-time a priority will always be cherished.

Elwood made friends easily. It was not uncommon for him to run into someone he knew from various periods and facets in his life. His genuine love for all people was well known. He was admired, adored, and loved by those who knew him.

Elwood was involved in many leadership callings in The Church of Jesus Christ of Latter-day Saints and he diligently fulfilled the assignments extended to him. He served three fulltime missions with his wife, Myrna. They first went to Nigeria, Africa. A few years later, Wolf Point, Montana and then on a service mission in Salt Lake City, Utah. Elwood and Myrna also served as temple workers at the Jordan River Temple. Many lives were blessed because of their unwavering service together.

He will be greatly missed and will be forever loved.

The family would like to acknowledge the countless hours of love and care he received from his daughter-in-law, Michele and his Hospice Nurse, Kim Dewitt.

A private family service will be held on Saturday, January 30, 2021, 11:00 a.m. Streaming will be available for extended family and friends by accessing https://youtu.be/1OrghmEGpt0

In lieu of flowers, the family would invite you to donate to https:https://philanthropies.churchofjesuschrist.org/

To order memorial trees or send flowers to the family in memory of Elwood George Peterson, please visit our flower store.