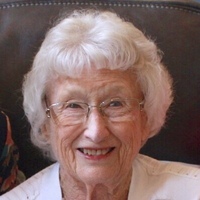 Eloise Adamson Andrus was born on August 28, 1921, in Menan, Idaho and passed away at home, August 13, 2021 in Draper, Utah. She was preceded in death by her husband, Garth, brother Dale, and her parents, Ernest Dougal and Bessie Campbell Adamson. She is survived by her six children: Vaughn (Ann), Brent (Cheri), LaRene Adams (Jim), Eilene Christensen, Rick (Debbi), and Brad (Teri).  She was a wonderful grandmother  to her 31 grandchildren and a great-grandmother to 103 great-grandchildren. She wrote birthday cards to all of 175 members of the family every year.

Eloise was a devoted wife and an efficient and organized homemaker and mother. She held many callings in The Church of Jesus Christ of Latter-day Saints, including president of the Oakland Stake Relief Society. She was a Relief Society President in her Ygnacio Valley ward in California at the age of 75.

At age 59, she and Garth began their 22 years of missionary service, presiding over the Philippines, Manila Mission (1980-1983). They served one year in the Salt Lake Temple and then returned to the Philippines as President and Matron of the new Manila Temple (1986-1989). She served with Garth as directors of the Nauvoo Visitors Center (1989-1991), and then with Garth as president. They presided over the Oakland California Mission (1993-1994). In 1999, Eloise told Garth that she wanted to serve a mission to Africa, so they were called to Zimbabwe (1999-2001). There she trained many sisters how to lead and serve in Relief Society and spent much of her time teaching 35 members (mostly young adults) to play piano so they could accompany in their branch and on their missions. Soon after completing their mission, they became restless and felt needed back in Africa, so they returned to the same mission and served another year in Zambia (2001-02). She and her husband retired from missionary service at the ripe age of 80.

Eloise remained active well into her later years, once accepting a grandson’s challenge to ride a zip line on her 90th birthday. She was a regular in the local water aerobics class for many years, right up to 6 weeks before her death, and she was often seen walking laps at her neighborhood park.

In spite of health limitations and her blindness brought on by Macular Degeneration, Eloise was very involved with her family and friends. We say farewell to a much loved and an elect lady until we meet again.

To send a flower arrangement or to plant trees in memory of Eloise Adamson Andrus, please click here to visit our Sympathy Store.

To order memorial trees or send flowers to the family in memory of Eloise Adamson Andrus, please visit our flower store.