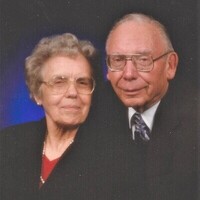 His hundred-year journey ended on May 11, 2020 at his home in West Valley City, Utah surrounded by a loving family.  It began on January 24, 1920 in Lincoln, Idaho.  Dad was born to Albert C Reed and Ivy Bernice Scoresby.  He had a younger sister, Donna.  His mother passed away suddenly when he was 3 years old.  He and Donna went to live with their maternal grandparents in Iona, Idaho and were raised by them.  His early years were spent attending school and working on his uncle’s farm.  In his youth, eggs were traded in exchange for piano lessons and he became very proficient and was soon playing in church.  He graduated from Iona High School in 1938.  He furthered his music education by studying at the McCune School of Music in Salt Lake City.  During this period of being a student, he had the opportunity to play on the tabernacle organ on temple square.  He also studied at the LDS Business College.  His life’s work was spent in business in Hospital administration, working in Idaho, Wyoming, and Utah.  He served a term as the president of the Idaho Hospital Association.

He has always been active in The Church of Jesus Christ of Latter-day Saints and served in several callings including ward organist, stake organist, stake and ward clerk, stake missionary, bishop, teacher, and Jordan River Temple ordinance worker.  He was a gardener wherever he lived and accented his homes with beautiful flowers and always had a bountiful fruit and vegetable garden.  He used his musical abilities to teach piano.  He taught piano for many years and many times he would have more than one recital for his students because there were too many to have just one.  Family history was a passion for him.  He collected family history data and stories and compiled more than 40 binders of memories and information.

After living in Midvale, Utah he and Charlotte moved to Blackfoot, Idaho in 1961 and were there for 14 years and then spent 2 years in Evanston, Wyoming.  For a period of time, he helped raise his great-grandson, Josh Barney, after his mother died.  In 1976, after his daughter Carolyn was diagnosed with MS, he and Charlotte moved to West Valley City where they were primary caregivers to her and her 4 children for more than 25 years.

During Lynn’s declining period the last few years, his daughter, JoAnn, was his primary caregiver greatly assisted by family and local friends and neighbors.

Due to the current circumstances, a live funeral is not possible. However, in order to honor our father, the family has recorded a virtual funeral which will be available online. The link is:  https:/tinyurl.com/y73yawfs. The funeral will be available to view on Friday. Interment, Minersville, Utah Cemetery.

The family is grateful for the wonderful care provided by Rocky Mountain Health Care, local neighbors, and ministering brothers and sisters.

To send a flower arrangement or to plant trees in memory of Ellis Lynn Reed, please click here to visit our Sympathy Store.

To order memorial trees or send flowers to the family in memory of Ellis Lynn Reed, please visit our flower store.