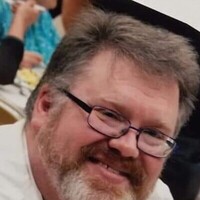 ElRay (known as Moe by his friends), was born in Logan, Utah to his father Lennis Ray Anderson and mother Myrna Kay Taylor Anderson. He faithfully served his mission for The Church of Jesus Christ of Latter-day Saints in Venezuela in 1984. There he met his future wife and mother of his daughters, Mirna Josefina Perez-Simancas. They were married civilly in Trujillo, Venezuela on December 21, 1985, then sealed in the Salt Lake Temple on February 6, 1986. On his birthday in September, he received the gift of his beautiful daughter, Mariana. Their second gift came a few years later in May, another daughter, Letisia, who decided to join the family. The third gift and fifth member of the family came some years later in August, yet another daughter, Carina.

ElRay and Mirna raised the girls in a multicultural bilingual home. ElRay loved sharing his Spanish speaking skills at work and in several callings in the Church. Music was one of his greatest passions, he loved to sing and was part of Madrigals, Men’s Chorus and many musicals in high school. ElRay joined multiple choirs throughout his life as well as his single man concerts in his home. In high school he participated in several sports, track and field, swimming, football and wrestling.

ElRay is survived by his three daughters, Mariana (Jesse), Letisia and Carina; his parents, Lennis and Myrna Anderson; his siblings, Paul, Anjanette, Daren, Nelisa and Trevor (Genel); and his many nieces and nephews.

ElRay loved to make others laugh and smile. He always made sure his loved ones knew how much he cared for them and how proud of them he was. ElRay loved to bring happiness to everyone.

To send a flower arrangement or to plant trees in memory of El Ray Lennis Anderson, please click here to visit our Sympathy Store.

To order memorial trees or send flowers to the family in memory of El Ray Lennis Anderson, please visit our flower store.