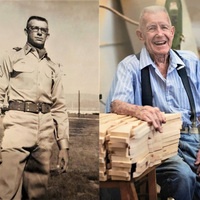 Edward was raised on a turkey farm and worked with his father until he was drafted into the United States Army in 1959. He was assigned to serve at Dugway Proving Grounds in Tooele County, Utah. He served in the Chemical Army Core. He was a platoon leader and attended the Officer Training Core in California.

Eddie and Renee met at the Normandie Skating Rink in Salt Lake City. After his discharge from the army, Eddie returned briefly to New Jersey and then returned to Salt Lake City to marry his sweetheart Renee.

Eddie and Renee married on March 25, 1961 in Elko, Nevada. Renee had previously been married and had two children, Galen Stephen and Holly Renee, which he later adopted as his own. Four additional children were born to the family: Edward Laine, (Ted), Karina Mary, Kara Jean, and Shauna Ann. The family was sealed together in the Salt Lake Temple on March 26, 1966.

Eddie worked at the Salt Lake Plant of Hercules Powder Co. later to be named Hercules Aerospace, building rocket motors for 30 years. During that time in life, he began working with wood and building quilting frames for Renee and then to sell, which he was granted a United States patent. With his gift of working with his hands, he created and developed other wood items as well, creating wood trains, planes, trucks, puzzles, crossbows, sling shots and 16 different rubber band guns including rifles, pistols and derringers. He was known as the “Toy Maker”. Eddie and Renee traveled all over the western states doing craft shows to sell the toys. He displayed his crafts at the Midway Swiss Days craft show for 22 years.

After retiring from Hercules, he continued with his shop work and created his business, E-BAR-Company in West Valley City.

Eddie and sons built a family cabin retreat at Tolegate Canyon where family and friends spent many years together enjoying the mountain air.

Eddie had his airplane pilots license at the age of 16 and loved planes and flying.

He worked for three years doing two jobs to pay for his wife’s education in nursing.

After the children were raised, he and Renee took many trips and cruises all over the worlds, eventually enjoying over 40 countries, 48 states and a multitude of islands.

Edward was a member of The Church of Jesus Christ of Latter-day Saints. He served as the Elders Quorum President twice and as a counselor in the ward Bishopric.

The family wishes to express their appreciation to all the wonderful caregivers including doctors, nurses, aides, physical therapist and occupational therapist that so lovingly helped him through his difficult last two months. His children were devoted to his care and loved him very much.

To send a flower arrangement or to plant trees in memory of Edward Grant Bartling, please click here to visit our Sympathy Store.

To order memorial trees or send flowers to the family in memory of Edward Grant Bartling, please visit our flower store.