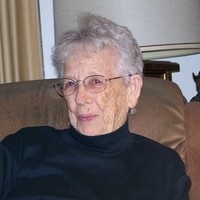 TAYLORSVILLE – Dorothy Sorensen, 99 passed away February 20, 2020 at her home in Taylorsville, Utah. Dorothy was born September 27, 1920 in Chesterfield, Idaho. Her husband

At a young age, Dorothy learned to work with the sheep and cattle at home and at the homestead in the summertime where she learned gardening. The Butterfields always had many cows to milk and the related chores feeding and caring for all the animals on the farm. Her mother Ivy May was a great baker and was well known for her many loaves of bread and pies she baked each day in her wood fired oven. Dorothy learned to milk, ride horses, garden, do work around the yard and in the house and make sure everyone was well fed and happy.

In 1935 when Dorothy was 15, she was visiting cousins in Taylorsville and went out with Alfred Butterfield and some friends that included Henry Sorensen who had become close with the

Butterfields and Phillips. Dorothy and Henry made a connection and knew there was something special there, but they were young and Dorothy had to return to Chesterfield, Idaho. Some years later Dorothy was back in Taylorsville and she and Henry were with Harold Phillips when Henry gave Dorothy a ring while in the back seat of Harold’s car. They were married in Salt Lake City, October 25, 1940. Even though World War II broke out just over a year later and Henry went into the Army Air Corps and served in the Pacific until the end of the war, they started their family and were married 68 years when Henry passed away in 2008. They were sealed together and with their family in the Salt Lake Temple January 24, 1964.

Dorothy was a great example to her family and friends right to the end. She always liked to serve tasty food, much of which came from her home garden. Any time she and Henry would travel, she had an eye for berries of any kind, wild or domestic and could turn them into the tastiest jam or jelly right there on the spot. She loved to share her bounties as well as many life stories with family and friends, but especially with her grandchildren and great-grandchildren.

Dorothy’s roots run deep in Taylorsville; her great-grandfather Jacob Kemp Butterfield homesteaded here in 1847 and built his home right across the road from where she has lived since 1949. Her home has always been open to visitors, especially family from Idaho to Alaska or wherever they happen to be living. Everyone liked to see Mother, Grandma, Sister, Aunt, Cousin or old friend Dorothy. She always had a smile, a story or something special to eat.

The family extends a heartfelt thank you to Dr. Krista Schonrock and Dr. Cynthia Papadopoulos and the nurses and caregivers from Intermountain Medical Hospice and Visiting Angels that have been so important during the past couple of months making Dorothy and family comfortable with a meaningful quality of life. A special thank you to granddaughter Tracie Sorensen who has lived with and cared for her grandmother for the past couple of years and made it possible to remain in her Taylorsville home till she returned home to her Father in Heaven and rejoined her lifelong companion Henry.

Viewings will be held Sunday evening from 6:00 to 8:00 PM at the Taylorsville 3rd Ward at 1457 W Atherton Dr. and Monday from 9:00 AM to 10:30 AM. The Funeral Services will be at 11:00 AM followed by interment at the Murray City Cemetery. Services provided by McDougal Funeral Home, 4330 S Redwood Road.

To send a flower arrangement or to plant trees in memory of Dorothy Marie Butterfield Sorensen, please click here to visit our Sympathy Store.

To order memorial trees or send flowers to the family in memory of Dorothy Marie Butterfield Sorensen, please visit our flower store.