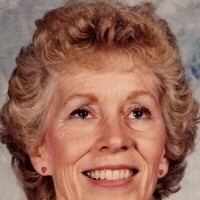 She attended Cyprus High School, where she began dating “the smartest boy in the class”, Jack Nielson.  As part of the greatest generation, he left for the military after graduation in 1944.  They were married September 12, 1946, in the Salt Lake Temple.  The three most important things in her life were marriage and a large family, education, and her commitment to The Church of Jesus Christ of Latter-day Saints.  She was a nurturing mother to 7 children, 3 of whom were born while Jack was in college.  She would not let him be discouraged.  She made ends meet and did small jobs from the home to help. There were also the mandatory piano lessons, for which the children are grateful.  All have developed significant musical skills that have been rewarding in their lives. We kids will never forget singing her favorite (somewhat old fashioned) songs with her in the car as we traveled around town.

After her children were in school, she went back to college and got a degree in elementary education in 1981.  She informed us that the younger students in her college classes were very jealous that the “old lady” was getting the best scores on the tests!!!  She was a valued elementary school teacher in Granite District for 11 years.  All her children have graduated from college, and many had post graduate education.  She loved her work with the young women in “Mutual”, and later served as ward and stake relief society president for many years. She was active in Daughters of the Utah Pioneers.

After retirement Jack and Dorothy travelled extensively throughout the world. Jack always regretted his inability to serve a mission, as his youth was interrupted by WWII.  Together Jack and Dorothy served in the New York, Rochester mission 1993-1994. On their mission Dorothy’s claim to fame was that her father was the model for the body of the sculpture of Angel Moroni on the Hill Cumorah and her grandfather the model for the head/face. They went on to be guides at Temple Square and ushers in the LDS Conference Center.  She was so proud that 11 grandchildren and 5 great-grandchildren served missions.  Dorothy lovingly cared for Jack as his health failed toward the end of his life.  He passed away September 25, 2012.

Mom made the most wonderful Sunday dinners with pot roast and Yorkshire Pudding.  Friends and family often received her amazing brown bread made from home ground flour. Her love and service to others is an example to all who knew her.

Dorothy is preceded in death by her husband, Jack; her parents, Elwin and Daisy Clark; and her little brother Milton, whom she spoke of often and missed dearly.

To order memorial trees or send flowers to the family in memory of Dorothy Jay Clark Nielson, please visit our flower store.