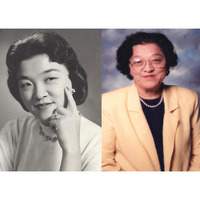 Dorothy Jean Mukai Hashimoto passed away on October 29, 2019 Dorothy was born on August 21, 1927, in Ogden, Utah to Kenjiro and Tono Mukai. She was the middle child of ten children and had close relationships with her siblings She was a loving and much loved daughter, sister, wife, mother, grandmother and aunt. Her generosity and warm heart enriched the lives of everyone she met. Dorothy spent her life selflessly caring for her family and friends. She was a hardworking, loving and strong support for her children, grandchildren, her many nieces, nephews and friends, who have been a blessing to her life and whose lives she has blessed.

She leaves behind her two daughters, Pamela Hashimoto and Tomi Gayle Hashimoto Warren, her son-in-law AJ Warren, her two granddaughters Alyssa and Marissa Warren, her sister Peggy Shimizu, and many other family members and friends. She is preceded in death by her husband Tom Hashimoto, her father Kenjiro Mukai, her mother Tono Mukai, her sisters Michiyo (Mickey) Teraji, Himeyo (Mey) Kariya, Itomi (Toni) Ushio and her brothers, Robert (Bob) Mukai, and Gerald (Jerry) Mukai.

Prior to her marriage, Dorothy worked in her family’s restaurant along with her siblings at Kay’s Noodle Parlor in Ogden Utah. The family grew close, not only as brothers and sisters, but also as friends. Dorothy and her siblings insured that their children would remain close and love and support one another. They celebrated holidays and birthdays with one another, raised their children together, and even traveled and vacationed with one another. To this day, the cousins remain close and support one another. .

She next worked for Francis W Kirkham’s insurance agency, as an office manager. While there, Dorothy cultivated a lifelong friendship with Genevieve “Chris” Stringham. Dorothy still returned to work at the family restaurant on weekends.

She met and married Tom Hashimoto and moved to Ontario, Oregon. While in Ontario, Dorothy met Pete and Miyo Inahara. They became lifelong friends. Tom and Dorothy had two daughters, Pam and Tomi Gayle. Tragically, Tom passed away from leukemia in 1962.

She returned to Utah and worked with her sister, Toni, for Catering by Ushio’s in food preparation and service, as well as the company’s bookkeeper. It was truly a family business, and Dot often brought her daughters to work. Dot, Toni, and Momo taught the girls how to separate doilies, put toothpicks in pineapple and convinced the girls that they had truly arrived when they could stuff the chicken salad puffs and roll the meatballs. They passed on their stellar work ethic, and Dot always made the girls think that helping and serving was not only valuable, but fun. Although a single mother, working multiple jobs, Dorothy never missed a back to school night, open house, or parent-teacher conference. She even served as a room mother and on the PTA.

She also worked nearly 30 years as a school secretary, where many of the children called her “Auntie Dot”. As a school secretary, she earned the love and respect of her colleagues, her administrators, and the children she served. After her retirement, several teachers called her and took her to lunch, and many “children’ now grown up, would stop her in the stores and greet her with enthusiasm and joy.

Her greatest role in life was that of a cheerleader and caregiver. She cheered as her granddaughters Alyssa and Marissa became Champion Irish Dancers watched their school and primary programs and listened with pride to their beautiful piano recitals. She rooted for her siblings’ children, grandchildren and great-grandchildren on and off the soccer, baseball, and football field. She joyfully attended recitals, school performances and church programs. She was proud of all her family members.

Services will be held on Saturday, November 2nd. A viewing will be at 10:00 AM viewing, funeral at 11:00. Services held at McDougal Funeral Home at 4330 South and Redwood Road, Taylorsville, Utah. Internment will be at the Ogden City Cemetery.

To send a flower arrangement or to plant trees in memory of Dorothy Jean Mukai Hashimoto, please click here to visit our Sympathy Store.

To order memorial trees or send flowers to the family in memory of Dorothy Jean Mukai Hashimoto, please visit our flower store.