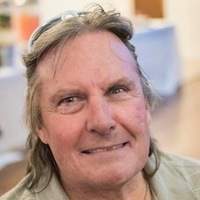 He was born on Mare Island in Vallejo, California on September 19, 1956, the oldest twin by a few minutes. He was a handsome man - handsome enough to make a mullet look good.

Donald had a life-long love for sports. He was an excellent athlete and loved softball, golf and most of all bowling. His skill at bowling was proved over and over and in 2015 he was inducted into the Great Salt Lake Bowling Association Hall of Fame for Superior Performance.

Donald was the kind of guy who never met a stranger. He had a heart of gold and would do anything in his power to help anyone who needed it. He will be sorely missed by all those who knew him.

In 2014, Donald was in a tragic car accident that took his legs from him. He was devastated and struggled to cope with his new life. It was the support of Mailyn, his family and all his friends that carried him through the difficult times. He is standing tall again and reunited with those who have gone before him.

Donald is preceded in death by his daughter, Lori Winter; and the mother of one of his children, Paula Hargadon.

A viewing will be held at McDougal Funeral Home, Friday, February 7th from 6-8pm.

A Celebration of Life will follow the viewing at Delton Sports Center from 8:30-10:30 pm.

To send a flower arrangement or to plant trees in memory of Donald Richard Winter, please click here to visit our Sympathy Store.

To order memorial trees or send flowers to the family in memory of Donald Richard Winter, please visit our flower store.