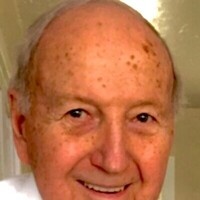 Donald Thorpe Standing was born in Salt Lake City on March 30, 1924. He was the remaining survivor of parents and five children, Robert, Alan, Marvin, Donald and baby Barbara. He grew up in the neighborhood of 10th East and 3rd South, SLC. He attended both East and West High Schools. He attended the U of U and Stevens-Henager College.  He joined the US Army and served in WWII from the beginning to the end of the war. He was attached to the 27th Infantry Division and was among the troops to enter Saipan and later was in the invasion of Okinawa. He was also with the first troops to enter Japan at the war’s end. He received the infantry combat medal and two campaign ribbons. Don loved photography, golf, handball and many family get-togethers.

He married Marilyn Harris on February 18, 1949; the marriage later solemnized in the Salt Lake Temple. Together they had three children, Shauna Rae, Wayne H. and Douglas Roy; 6 grandchildren; and 14 great-grandchildren.

To send a flower arrangement or to plant trees in memory of Donald Thorpe Standing, please click here to visit our Sympathy Store.

To order memorial trees or send flowers to the family in memory of Donald Thorpe Standing, please visit our flower store.