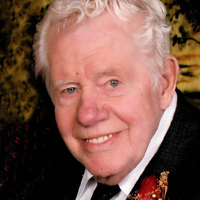 Donald Cleon Christensen passed peacefully at the age of 97 on April 11, 2020. He was the 6th child of William and Ella Christensen.

He spent many of his early years on the family farm on the corner of Redwood Road and 4100 South in Granger, Utah. He was an entrepreneur, master electrician and pilot. He will be remembered as a loving husband, father and grandfather. He was always there to help his children and grandchildren.

During World War II, he served on the USS San Diego (CL53) and his name is on the memorial of the USS San Diego in San Diego. As an Electrician’s Mate in the Pacific, he earned Bronze stars for the capture and occupation of Saipan, Guam, the Battle of the Leyte Gulf and Iwo Jima. One of the highlights of his life, was being escorted by his son to the World War II Memorial in Washington DC on an Honor Flight.

He owned and operated AA Electric for many years. He also owned and operated several gas stations. He was the concessionaire of Hite Marina on Lake Powell for many years. He was involved in many other business enterprises during his lifetime. His two favorite places were the cabin at Hebgen Lake and on his houseboat in Lake Powell. He loved to fly his airplane, drive his boat, travel, spend time with his family and pets. He loved taking his family on vacations.

He was a member of The Church of Jesus Christ of Latter-day Saints. He married Norma Buckalew in 1946. They were married for 46 years and had six children: James, Patricia, Marchawna, Lucinda, Susan, and Olene. He had 10 grandchildren and seven great-grandchildren.

He later married Geraldine (Geri) Koehler. Geri said with Don’s charming personality, quirky smile, and those beautiful blue eyes, she asked him to dance. That was the start of their relationship and 15-year  marriage. His family will be forever indebted to the love and care she provided him.

Preceded in death by Norma; and two daughters, Marshawna and Patricia. He is survived by his wife Geraldine Koehler Christensen. He will be missed by her loving family and his children and grandchildren. His final resting place will be the Salt Lake City Cemetery. Services will be announced at a later date.

To send a flower arrangement or to plant trees in memory of Donald Cleon Christensen, please click here to visit our Sympathy Store.

To order memorial trees or send flowers to the family in memory of Donald Cleon Christensen, please visit our flower store.