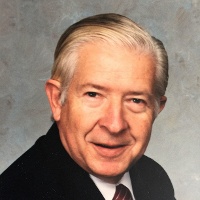 Donald Anderson Russell died August 1, 2019 in Taylorsville, UT, at the age of 93. He was born January 8, 1926 in Ogden, UT, the son of Anthony and Nellie Anderson Russell. He attended Ogden schools including Mound Fort Junior High and Ogden High School where he excelled in track.

Don had an incredible work ethic and always had at least one job since he was in kindergarten selling newspapers and magazines. Other Ogden jobs included picking and packing fruit and vegetables at the American Can Company where he packed railroad cars with crates from the cannery. Later he sold shoes. He was a true child of the Great Depression and always desired to be working.

Don married La Dona in the Logan Temple on July 15, 1949. Just weeks ago they celebrated their 70th wedding anniversary. Theirs was a marriage of unprecedented kindness and love towards one another.

Always proud of his Southern Utah heritage, Don enjoyed time with relatives in Grafton and New Harmony. He is one of the last people to have spent time living in Grafton.

Don graduated from Weber College and the University of Utah and then began a career in business. After a few years he realized that his career would keep him away from home, and he went on to earn his masters degree in education from the University of Utah. His educational career spanned four decades as he began teaching school in Ogden in the early 1950s and moved to the South Bay Area of California where he taught school in Sunnyvale, CA.

Don and La Dona lived in Saratoga, CA for more than 30 years where they raised four children and were active in the community and The Church of Jesus Christ of Latter-day Saints. Some of Don’s numerous Church callings were counselor in the Los Gatos ward bishopric, stake clerk, and high priest group leader.

In 1991 Don and La Dona relocated to Murray, UT where they enjoyed many happy years.

Don had numerous hobbies and interests including gardening, travel, the Big Band era and sound, poetry--having authored thousands of poems on almost every imaginable topic, stamp collecting, the Detroit Tigers, and painting large school playground maps throughout California and Utah. Above all, he loved his wife and family.

To send a flower arrangement or to plant trees in memory of Donald Anderson Russell, please click here to visit our Sympathy Store.

To order memorial trees or send flowers to the family in memory of Donald Anderson Russell, please visit our flower store.