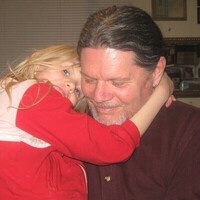 Gary Dean Robinson, 66 years old, passed away from this earthly existence sometime in the early morning hours of Tuesday, May 10, 2022, in his West Valley City home, from complications of various severe health conditions.  It wasn't his time to die yet, but he was taken from us anyway.  He is survived by his wife, Lisa Robinson; daughter, Trisha Robinson; cat daughter, Jinxy; cat son, Choco; sister, Sandra Robinson; sister, Teresa Robinson; and several nieces and nephews.

Gary, known as Dean by his friends, was born on February 26, 1956, in Dayton, Ohio, to Carl and Mae Robinson.  He was the second of five children, and the only boy.  He was raised in Ohio and Kentucky.  Since he was a hillbilly, he basically grew up with a gun in his hands.  He also loved playing guitar.  His sister Teresa said he could play almost any stringed instrument.  He had guitars, mandolins, and banjos, but his favorite was the guitar.  He rebuilt a 1936 Kalamazoo guitar, and it was his best friend.  It's a rare guitar brand.  There are only about 200 of them.  He spent a lot of time as a boy roaming the Daniel Boone national forest, which was just behind his house.  He gathered nuts from trees for his mother.  He once had two flying squirrels as pets, Pete and Repeat.  They slept in his shirt pocket.  He took them to school with him.  Once, he forgot to bring something for show and tell, then realized the squirrels were in his pocket.  He took them out, and the kids got freaked out and scared the squirrels; it took a long time to catch them.

Dean left home at 13 years old and made his way to Florida.  As soon as he was old enough, he joined the Air Force.  Because of his expert marksmanship, his first job in the military was to compete on the Air Force rifle competition team.  All he had to do was show up at competitions every month or so.  He rode his Triumph motorcycle across the U.S to the competitions for 18 months.  The team he was on went to the Olympics, but he was unable to go, because a car battery blew up in his face.

Dean traveled the world during the course of his military career.  He was stationed at various bases across the U.S and Europe.  He also had tours in Thailand and Korea.  He went to Korea twice and loved it.  He learned the language pretty well, and later taught Lisa a few Korean words and phrases.  He completed his GED while in the Air Force, and was even married for 6 years, but his first wife divorced him while he was working on an oil rig and took everything. They had no children.

In 1986 or 1987, Dean was riding his motorcycle on military business when he was run over by a double semi-trailer.  He almost died.  The accident almost tore his back in half.  He was in a VA hospital for 18 months and was finally given an honorable discharge as a disabled vet.  At the time of his release, he could barely walk, but he later met some good chiropractors who fixed the slipped disk in his back enough, so it almost didn't bother him anymore.

After his military career ended, he moved to New Mexico and got his BS degree in Geology at New Mexico State University, then went up to Utah and took the executive MBA program at the University of Utah in Salt Lake City.  In November 1997, he met his wife Lisa at a wedding.  He was playing guitar at the reception when she approached him and asked if he would give her guitar lessons.  Dean and Lisa began dating on February 24, 1998.  They soon realized they were best friends and never wanted to be apart.  In July of 1999, they eloped to Las Vegas, Nevada, where they were married at the country clerk's office on July 20, 1999, wearing just overalls.  They renewed their vows in three later ceremonies.  They had their marriage sealed on July 20, 2000.  On July 14, 2012, they had a Native American/Celtic handfasting ceremony, and on May 9, 2022, hours before his death, their daughter Trisha married them a fourth and final time.  It was one of his last requests, that she get her AMA minister's license and marry he and Lisa again, though they were hoping he would be well by then...and he was sleeping at the time of the ceremony.

Dean's only human child, Trisha Lenee Robinson, was born on his birthday in 2004, February 26, the year he turned 48.  He always said she was the best thing that ever happened to him.  He was so proud of his daughter.  He taught her his love of music and home-schooled her through 9th grade. There were so many family outings and day trips.  A lot of time was spent at the zoo.  They sang karaoke at family friendly venues when Trisha was younger.  Dean's first adopted cat child, Jinxy, joined the family in November of 2012, 7 months old.  He was allergic to cats but liked them.  He was looking at cats one day at Best Friends Animal sanctuary, when a female silver tabby jumped into his arms.  He wasn't allergic to her at the time and asked his family if they could adopt her.  Lisa and Trisha agreed.  Jinxy loved her Dada.  She would meow I love you to him so he would brush her, and she would sometimes jump in his lap, which she never did with the other family members.  He later did develop some allergies to her, but he loved her anyway, and she would sleep right next to him in bed.  His other cat child, Choco, is a long-haired male, dark gray with a white belly and fur.  Choco was feral but started living in the backyard shed sometime in 2018.  He's about 4 or 5 years old.  Dean told Lisa how to tame the cat with food.  She followed his instructions, and soon Choco was jumping into her lap.  He loves to cuddle, much more so than Jinxy.  Lisa is like his Mama.

Dean loved to watch movies and tv shows, especially martial arts movies.  He really liked old westerns, and Cary Grant movies.  He loved eagles, especially bald eagles.  He stopped driving when Trisha was four or five, due to health concerns, but he walked everywhere, for as long as he could.  He felt his second name should be Walking Eagle.  He loved to pick guitar and play pool.  When Trisha started attending high school at a local charter school, Dean & Lisa started date days.  They would go out to breakfast and then to the mall, for massages in the massage chairs.  They would go on drives and go to the zoo.

Dean wasn't much of a churchgoer the last 16 or 17 years of his life, and didn't affiliate with any particular church or religion, though he studied all of them, and was quite knowledgeable about the various books of scripture.  He particularly loved the Bagavad Gita, from Hindu scripture.  He read it over and over.  He was a deeply spiritual man, who had a personal relationship with his God and wasn't afraid of death.  He had many sacred spiritual experiences, some of which he shared with his wife.  He even wrote a book about spirituality, which is not yet published, but may be in the future.

He was taken from us way too soon, but at least he's not in pain anymore.  Soar with the eagles now, Walking Eagle.  "May you shelter in the palm of the Creator's hand and may the last embrace of the mother welcome you home."

To order memorial trees or send flowers to the family in memory of Gary Dean Robinson, please visit our flower store.