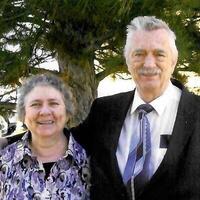 Darwin H. Smith lost his battle with lung and heart disease and died in hospice care at St. Mark's Hospital in Salt Lake City, Utah. It was hoped that he could have stayed at home until the end, but his symptoms became too severe, and he requested that he go to St. Mark's Hospital.

Darwin was a quiet man, but always there for anyone who needed him. Most people didn't realize what a nut he was. He had a rather unusual sense of humor that left many, including his wife, scratching their heads and wondering. They were probably saying to themselves something like, "I don't get it". He was so loving, accepting and tolerant that it is rare to know someone like that.

Darwin was born in Brigham City, Utah in what would eventually be a family of nine children. He graduated from Box Elder High School and met his future wife (Ronda Rae John) when they were both in separate choirs for the Box Elder High School Christmas program. When they were on breaks, he would hold mistletoe over her head hoping for a smooch but Ronda just said, "Get away from me". Finally, after several tries for a date, she finally said yes.

Darwin and Ronda waited for two years while he served a mission to Hawaii for The Church of Jesus Christ of Latter-day Saints. When he got home, they married in 1966 in the Logan Temple at Logan, Utah. Darwin loved Hawaii and they were able to go back a few years later to visit.

Darwin was an exceptional painter and worked at the University Hospital and retired from there in 2007. He enjoyed seeing an ugly wall be transformed into something really nice.

Dar (as he was called by his wife) loved nature hikes, camping, just about anything in the outdoors and he and Ronda had quite a few adventures in their travels. (Think three hours to go just 60 miles in Hawaii). He wasn't so great at horseback riding, but he gave it a go even though he hadn't had much experience riding. He enjoyed sports, especially basketball. (Ronda at 5ft 2in. didn't have a chance against 6ft. Darwin). He liked dancing and he and Ronda did a lot of dancing when they were dating. He also was in the LDS Youth Dance Festival as a teenager. Darwin liked strategy games like chess, Stratego and puzzles. He really enjoyed science fiction movies such as Star Wars, Star Trek and other good ones. He especially liked westerns, the older ones like the John Wayne movies, The Magnificent Seven and others. He actually liked all kinds of movies as long as they were good even if they were romantic comedies.

Darwin like critters, horses, dogs, cats and just about anything on two to four legs.

Darwin loved his family and Family History. He enjoyed looking up ancestors and seeing what work had been done or what hadn't been done.

Music was one of his favorite things and he liked all kinds. He learned how to play the ukulele while he was on his mission to Hawaii. "Our song" was "Moon River" and Ronda's harp teacher played it for them at their 50th wedding anniversary party.

Darwin was a collector and had a bunch of baseball-type caps. He had one for just about everywhere he went.

Ronda very much admired him the couple of times he actually saved some lives. One time was when we had gone on a rubber boat down Provo River. Neither one of us had ever taken even a short river ride so we had a guide. There was a 6'6" BYU student on the boat with us. We were ahead of another two boats with a mom, toddler and teenage boy in one and a retired LA police officer and his two teenage grandsons in the other. They didn't think they needed a guide because they were experienced river runners. As it turned out, we got through the train trestle openings, but the family got dumped in the river because they hit the middle part and the boat got swamped. Our guide pulled our boat over to the side and out of the water and headed up to see about the ones that were in the river. He missed the mom, toddler and teenage boy. Darwin and the BYU student got in the river as far as they could without getting swept away themselves and rescued the mom, toddler and the teenage boy. Everyone ended up accounted for and were returned to the start safely. The second time he saved lives was when we lived in an apartment in South Salt Lake. We heard a duck out by the road quacking furiously. Darwin went down to see what was disturbing her and her tiny ducklings had fallen into the drain. Darwin took the cover off and rescued at least seven or eight little fluffy yellow ducklings. Mama duck seemed to know that Darwin was rescuing her tiny brood and had stopped quacking.

A family of children eluded Darwin and Ronda, but they had one special son named Clinton John Smith. Unfortunately, Clinton died of a heart attack in 2003 at the age of 30.

Darwin and Ronda were married a little over 55 years. He was preceded in death by his parents, Heber Percy Smith and Emma Myrtle (Paskett)Smith. Also preceding him were his older brother--Legrand Heber Smith and Richard Elice Smith. He lost his younger sister, Gloria Fae Smith and a younger brother Harvey Curtis Smith before he passed.

Darwin's callings in the Church were important to him and he would fulfill them to the best of his ability. He had been a Primary teacher, Sunday School secretary, Counselor in the High Priest Group leadership, stake missionary and Ward librarian. He loved being a librarian because he could talk with all the people who would come in and he especially loved the children that came in. He would ask them if they had been good in class and then give them a little piece of candy if they said yes. So even though he didn't have a bunch of kids, he treated the kids that came into the library like they were part of his family.

Darwin will be sorely missed by those who knew him in the ward, at the hospital and other places he has made friends. He accepted everyone no matter what religion they were or had other unique characteristics. Ronda would tell people that Darwin was the most decent man a person would ever want to know.

Services for Darwin will be held Saturday, July 3, 2021, 11:00 a.m., Taylorsville 9th Ward building, at 2030 South Chateau Ave. in Taylorsville, Utah, where a viewing will be held prior to services from 10:00 am to 10:45 am. Graveside services will be conducted at 12:30 pm at Memorial Redwood Mortuary and Cemetery, 6500 South Redwood Road, West Jordan, Utah. Please park in front of the building and they will cart us down to the gravesite.

To send a flower arrangement or to plant trees in memory of Darwin H Smith, please click here to visit our Sympathy Store.

To order memorial trees or send flowers to the family in memory of Darwin H Smith, please visit our flower store.