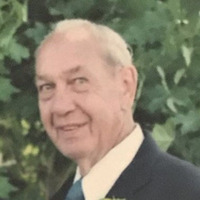 David Dale Williams, age 94, passed away on April 14, 2021 at the Murray, Utah Intermountain Medical Center of pneumonia. Dale was born May 22, 1926 in Malad City, Idaho, to John Haynes Williams and Eleanor Jones.

Dale served in the Army in World War II, drafted in August 1944, serving in the 27th infantry division. Dale was part of a group that planted the United States flag on the top of Mt. Fujiyama. Dale returned to the U.S. and was honorably discharged in September of 1948, as a rank of Sergeant. He graduated from the University of Utah in Salt Lake City, Utah in 1954 with a business accounting degree. He married Lois Vaughn on January 1, 1954 in Las Vegas. They were later divorced in 1984. Dale was employed by the State of Utah and finally retiring in January 1986 after over 30 years of service.

Family and friends can attend the viewing virtually at: https://vimeo.com/537416521

To send a flower arrangement or to plant trees in memory of Dale Williams, please click here to visit our Sympathy Store.

To order memorial trees or send flowers to the family in memory of Dale Williams, please visit our flower store.