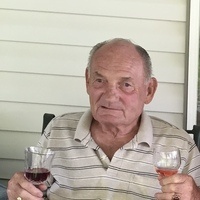 Our beloved husband, father, brother, and grandfather left this earth in the early morning hours of March 12, 2021 after enduring many health related issues over the last year.  Dad was born on May 29, 1945 in Salt Lake City, Utah to Ernest Dale and Belva Jarrell Nelson.  He was the third of six children which put him in line to uphold the “middle” child stigma and that he did with grace and charm.  There was never a dull moment as dad grew from a boy to a man.

Snowmobiling in the winter and boating in the summer was something we grew up on.  Going on vacation together was something he looked forward to.  Dad was always interested in what everyone was doing and showed up as a faithful spectator.  From dance recitals to horse shows to any sporting event, he was there to cheer us on.

Many people knew Dad for his ability to produce the best home grown tomatoes.  He would always raise an excess of plants because he enjoyed sharing his masterpieces with family and friends.  He always said “Never plant until after May 10th.” and “We should get a ripe one by July 23rd”.  Dad had a strong work ethic and always tried to instill that in his family.  He was a hard worker with a strong commitment which was evidenced by his 43 years of service to Sweet Candy Company.  Dad was a dedicated employee and they knew they could count on him because missing a day of work was not an option in his book.

Dad is survived by his wife of 55 years; his two daughters; five grandchildren; six great-grandchildren; and three brothers, Bob (Nancy), Jim, and Barry (Carla).  He is preceded in death by his father; mother; brother (Mark); sister (Karen).

A viewing will be held to honor dad on March 16, 2021 at McDougal Funeral Home on 4330 S Redwood Road where friends and family may visit from 6-8:00 pm.  On March 17th Dad will be laid to rest at the Tabiona Cemetery.  Graveside services will begin at 2 pm.

To send a flower arrangement or to plant trees in memory of Craig LeRoy Nelson, please click here to visit our Sympathy Store.

To order memorial trees or send flowers to the family in memory of Craig LeRoy Nelson, please visit our flower store.