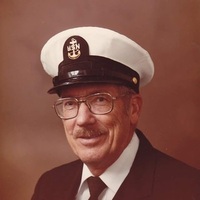 Charles Corydon Granger, (Bob) passed away peacefully in his Kearns home on Sunday, August 2, 2020.   His final days were spent surrounded by family and friends.

Bob was born on September 12, 1926 in Salt Lake City, Utah.   He graduated from South High School and immediately joined the U.S. Navy to support our country in World War II.   During the war, Bob served on the USS Dawson (APA-79) and USS Strive (AM-117) as a Boatswain’s Mate.   Following the war, he transferred to the U.S. Naval Reserve.  Bob served a total combined time of 42 years military service to our country.

Bob married his high school sweetheart, Betty Jeanne and they settled in Kearns, Utah where they raised 1 son, 5 daughters and 1 granddaughter.  Bob worked at the United States Postal Service, South Salt Lake branch as a Letter Carrier for 25 years.   When he was not working, you could find him at the lake fishing or off somewhere lending a hand to someone in need.  Following retirement, Bob took on many hobbies starting with making wooden toys for his grandkids and then shifting to baking.  He mastered the art of pie pastry and then moved on to master cookies.   He was probably the proudest of his “everything but the kitchen sink” cookies and you could not leave the house until you had one.   Around Kearns, he became known as the “cookie man” making and distributing cookies to all the businesses he frequented around the Kearns / Taylorsville area.

To send a flower arrangement or to plant trees in memory of Charles Corydon Granger, please click here to visit our Sympathy Store.

To order memorial trees or send flowers to the family in memory of Charles Corydon Granger, please visit our flower store.