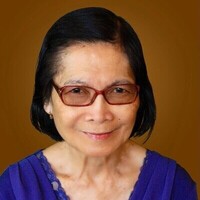 Cely was born on May 19, 1940, in Tuguegarao, Cagayan, Philippines, the fifth of ten children, to Ernesto Maguigad Narag and Crescencia Taguinod Gumabay. Even at a young age, Cely showed great aptitude in entrepreneurship, math, and education. She sold candies to her classmates and teachers often delegated the opening of the classroom and playground supervision to her. Active in 4-H, she also was a star “killer” in volleyball and was named Miss Faith her sophomore year in high school.

Cely attended FEATI University in Manila, where she met and fell in love with a fellow engineering student from Mariveles, Bataan, named Carmelo Rolando “Rolly” Punzalan. Cely recalled, “In my second year of college at FEATI, I was sitting in a room waiting for a class to start. This handsome young man who spoke fluent English came in and asked me questions.”

During a typhoon that flooded the streets of Manila on May 19, 1966, Rolly carried Cely in his arms into a church, where they solemnized their life together in Holy Matrimony. The next fifty years, they would experience deep joys and continued to weather storms together. By the grace of God, they celebrated their Golden Wedding Anniversary with family and friends in 2016. Rolly passed away the following year in October, but Cely’s devotion continued (and continues) beyond the grave.

After graduating with a BS degree in Civil Engineering in 1964, Cely went on to perform stellar work for engineering firms. Eventually, however, she answered a different siren call. In 1968, she began her lifelong career as an educator. During her first decade teaching at the Philippine School of Business Administration (PSBA), she helped students pass the CPA exams and authored textbooks that were used in universities all over the Philippines.

Despite the accolades, Cely’s greatest joys came at the birth of their three children—Gladys “Joy”, Rolando “Lizor/Doy” and Golda “Jewel”. She loved to cook their favorite foods and encouraged them in their educational goals. She taught them gentle meekness and kindness by her example. Her joy increased when she and Rolly were blessed with four apos—Sierra, Lance, Wesley and Sabrina.

For ten years, Cely taught business math at PSBA before going on to join the middle management team at the MIS division of the National Irrigation Administration. In July of 1987, with 15-year-old Jewel, she took a summer training at Utah State University (USU). That fall, mother and daughter began a new chapter of their lives, rooming together at college, where Cely pursued her master’s degree, and Jewel her bachelor’s.

At USU, Cely tried some fun new things, namely, her first snowfall, bowling, and driving a car (with 16-year-old Jewel as her mentor). She made lasting friendships and considered her years in Logan as some of the happiest of her life.

However, since she had to live apart from her sweetheart, she felt a void. Christmases and holidays were especially hard, though the sting was lessened by Jewel’s company and the hospitality of friends. When she could finally do so seven years later, Cely petitioned for Rolly to join them, eventually getting their American citizenship.

After obtaining her master’s degree, Cely resumed her teaching career as an adjunct professor at Salt Lake Community College (SLCC). Although she was 62 by the time she assumed full-time status, she never let age daunt her, inspiring legions of students and fellow faculty. She served on many leadership roles and continued co-authoring business math textbooks. Two years before her retirement at the age of 77, she earned SLCC’s prestigious Teaching Excellence Award.

A thread and anchor throughout Cely’s life was her ardent faith in our Savior, living her Roman Catholic faith with constancy and devotion. She was never without her rosary and she constantly prayed for her family and friends. For over a decade, she served faithfully at the St. Martin de Porres Catholic Church. After her retirement, and miraculously despite Rolly’s serious health challenges, they embarked on an inspiring pilgrimage to the shrine of the Blessed Mother Mary at Lourdes, France, with their daughter Gladys, who lives in Ireland.

A private funeral was held on August 14, 2020. Much appreciation and thanks to St. Martin de Porres Catholic Church, McDougal Funeral Home, and Valley View Memorial for the beautiful services. Mommy/Lola, we love you and thank you for being a bright beacon in our lives.

To send a flower arrangement or to plant trees in memory of Celestina Narag Punzalan, please click here to visit our Sympathy Store.

To order memorial trees or send flowers to the family in memory of Celestina Narag Punzalan, please visit our flower store.