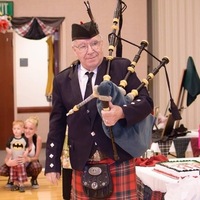 Bruce J Hansen, 87, of Salt Lake City, passed away on Thursday, February 24, 2022, peacefully at home with his bride by his side. He was surrounded by his family and loved ones in his last days.

Bruce was born on July 22, 1934, to Ferrel Ernest Hansen and Helen Mae Jensen in Richfield, Utah. After the passing of his mother at age 5, he moved to Salt Lake City and was raised by his grandmother and aunt. After graduating from West High School in 1952, he started technical training with Chrysler for his career in auto mechanics.

In 1946, at the age of 12, he met his sweetheart, Janice Lee Schaerrer (age 10), through the back fence that connected their houses. They were later wed in the Salt Lake Temple on June 10, 1954, and enhanced their lives with four boys: Douglas, Darrel, David, and Donald.

Bruce was a member of The Church of Jesus Christ of Latter-day Saints. He held many callings and served as a member of the Bishopric, the High Council, and the Elder’s Quorum Presidency. He enjoyed his time serving in the bishopric most of all. He was always the first to go to church on Sunday and the last to leave, just so that he could tell his stories to those who had also heard them the week before.

Bruce was a force of nature, determined to provide for his family and give them the life he felt they deserved. His family meant more to him than anything else in the world. He was eternally proud of his boys.

He started his career with Freeds Chrysler/Plymouth. He worked as an auto mechanic and service manager for 52 years. For being the longest-tenured employee, he won a cruise to the Eastern Caribbean islands. The cruise was a trip of a lifetime for Bruce and Janice, and he drove the family crazy with cruise stories for years to come.

Bruce’s biggest passion in life, besides his family, was the bagpipes. An avid piper, he spent countless hours perfecting his ability, much to the detriment of anyone around him. For 20 years, Bruce was the Pipe Major of the Salt Lake Scots. His piping career spanned over 30 years. He had the opportunity to travel to Scotland in 1994 to support the Salt Lake Scots as they competed in the World Championships.

He is preceded in death by his parents, Ferrel and Helen Mae; twin brother Douglas J; brother Craig; daughter-in-law Laurie; and many aunts; uncles; grandparents; and cousins.

He is survived by his wife of 67 years, Janice; his four sons, Douglas (Mary), Darrel (Shirlene), David (Susan), and Donald (Mina); 21 grandchildren and 18 great-grandchildren.

Bruce and his family are thankful for the care he was given at IMC and Inspiration Home Health, and Hospice, especially to his nurses, Kate and Heather.

A private family graveside service will be held on Friday, March 4, 2022, in Richfield, Utah. If you would like to send flowers, please send them directly to Janice or consider donating to your favorite charity.

He will be greatly missed.

To order memorial trees or send flowers to the family in memory of Bruce J. Hansen, please visit our flower store.