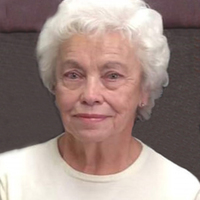 Betty Alice Jacobson Jensen Redding of Vernal, Utah passed away on March 16, 2020 at the Ashley Valley Regional Medical Center in Vernal, Utah after a short illness.

She was born July 10, 1932 in Bingham, Utah to Richard George and Alice Loader Jacobson. She attended Jordan High School in Salt Lake City, Utah. Betty married George Evan Jensen on October 31, 1950 and together they had five sons, George, Steve, Mike, Randy and Jack. George died February 13, 1979.  She later remarried Jake Redding on July 25, 1986. He passed away May 4, 2014.

She was an active member of The Church of Jesus Christ of Latter-day Saints, where she served in many callings. Her greatest joy in life was her family. She was so proud of her children, grandchildren and extended family members. Betty worked for years at Albertson’s and Smith’s as a cake decorator.

To send a flower arrangement or to plant trees in memory of Betty Alice Jensen Redding, please click here to visit our Sympathy Store.

To order memorial trees or send flowers to the family in memory of Betty Alice Jensen Redding, please visit our flower store.